Mental health online: US police posts of crises may traumatise

Pedestrians walk across the George Washington Bridge, underneath netting designed to prevent jumping off the bridge, in New York. In recent years, officials who oversee so-called suicide hotspots like San Francisco’s Golden Gate Bridge and the George Washington Bridge, which spans New York City and New Jersey, have worked to install prevention or deterrent systems. — AP

The videos are difficult to watch.

In one, a man dangles over the edge of an Oklahoma City overpass, his legs swinging in midair as police grab his arms and pull him from the brink. In another, a woman hangs high above the Los Angeles Harbor as a half-dozen officers drag her, head-first, up the side of the bridge. The panicked voices of cops cry out, “We got you, we got you!” just before they pin her to the ground and pull out handcuffs.

The short clips were posted on official US law enforcement social media accounts, part of a longstanding practice by police agencies to showcase their lifesaving efforts online – especially in 2021 as desperation grows for positive press amid accusations of excessive force and racism following George Floyd’s murder, and rising gun violence and killings.

But with renewed attention on officer interactions with people who are suffering from mental health issues, experts and advocates are taking another look at these posts with an eye toward whether they exploit the very victims law enforcement just saved.

“It’s like we were living in this tragedy with them,” said Kevin Berthia, a mental health advocate who has survived his own suicide attempts. “Now how is that not creating trauma for anybody else? Who else is this triggering?”

The posts are easy to find on Facebook, Instagram and Twitter. US police departments nationwide may upload them without the permission of the person in crisis – though their identities are obscured – without a warning about contents and without consulting mental health professionals.

Debbie Plotnick, vice president for state and federal advocacy at Mental Health America, reviewed a half-dozen from around the country.

“Yes, they helped get a person down and that is commendable,” she said, but added: “I’m not seeing that this has value in helping people’s mental health.”

While police say mental health is their priority, the footage appears to tell a different story. Law enforcement agencies have long tried to showcase the harrowing and dangerous work of fighting crime and saving lives, and the feeds also include officers delivering babies, acts of kindness and shows of strength.

The New York Police Department, along with images of smiling cops, often tweets detailed captions that include the exact pier someone jumped from or the number of pills they swallowed before the officers “saved” them. Other posts include videos from the scene.

Yet the American Association of Suicidology specifically suggests that any reporting on suicide or suicide attempts not include the method or location. The association recommends that photos and videos from the scene also be excluded, even if the person’s identity is concealed.

Some experts fear copycats, saying such detailed posts – like the recent Los Angeles Police Department posts with body-cam footage of the woman's suicide attempt on the bridge – basically give a manual to vulnerable people.

“Here’s a spot on the bridge where it literally took like six uniformed police officers to drag this person back over the side,” said Jonathan Singer, president of the American Association of Suicidology.

The LAPD declined to comment, but said in a statement that it does not have a specific policy in these cases. The agency said it strives to protect the individual’s identity but does not typically seek permission beforehand.

In the 55-second video – posted to Facebook, Twitter and Instagram less than a month after the incident – police were called to the bridge in San Pedro after the woman was seen climbing over the side. The scene is fraught with tension – rushing wind, the woman’s panicked breathing, the squawking of the radios echoing off the bridge’s metal, the clicking of handcuffs.

“Great teamwork resulted in her receiving the help she needed,” the LAPD’s posts said, with a link to the National Suicide Prevention Lifeline’s website. “Remember, you are never alone and there is always help.”

In Oklahoma City, the overpass video posted to the police department’s Facebook page in May includes body-cam footage and interviews with responding officers. The man’s face is blurred out, though the department did not seek his permission before posting the video.

The final clip shows the man being loaded into a police cruiser with the text: “After rescuing the man, officers took him to the hospital and started the process of getting him the help he needed.” The phone number of the National Suicide Prevention Lifeline follows.

Master Sgt. Gary Knight, a spokesperson for the Oklahoma City Police Department, said the goal was showing residents how the actions of the officers saved the man’s life during the two-hour incident.

“The last thing we ever want to do is hinder somebody’s recovery when they’ve been in a state of crisis,” Knight said. “We’re not out here to try to make somebody’s condition worse. That’s why we showed up in the first place – to try to help that person.”

Daniel Reidenberg, executive director of the Minnesota-based Suicide Awareness Voices of Education, said such social media posts may actually deter viewers from calling 911, for fear they might also get handcuffed or arrested.

“It’s too complex of an issue to boil down into a video like that,” he said.

Ronnie Walker agrees. Her stepson died by suicide when he was a college junior, prompting her to form a now-international support group and online forum for other grieving families, the Hawaii-based Alliance of Hope For Suicide Loss Survivors.

“It was really devastating for everybody who knew and loved him,” she said, speaking on the 26th anniversary of her stepson’s death. “It was as if a grenade went off in our family and everyone was wounded, each in their own way.”

Looking at the police posts, Walker said, could easily be traumatising for people who have lost loved ones to suicide.

“I don’t want to dismiss the heroism of the police or that they have kindness in their hearts,” she said. “I just don’t see some of those videos as portraying that or conveying that. It’s more sensational.”

The police department of Appleton, Wisconsin – a city of 74,000 north of Milwaukee – took a different approach. They had discussions for nearly a month before going public in February with an eight-minute suicide intervention video that is much less explicit than others. They also sought permission from the man who had been in crisis and his family and worked with mental health organisations.

“Is this going to be positive for our community? Is this actually going to cause the conversations that we want to happen around mental health?” Lt. Meghan Cash said. “Or is this just a video?”

About 30 people die by suicide annually on the Golden Gate Bridge, and another 150-plus people try to take their lives there each year. Many come in contact with the 36 members of the bridge patrol – whose captain, David Rivera, hopes new conversations around mental health, like Simone Biles’ discussions at the Olympics, will encourage people to get help.

Rivera’s department does not post publicly about suicide interventions, and instead chooses to privately honour its members and others who may have been involved in rescues, like bridge ironworkers, roadway staffers or officers from other police agencies.

“We can recognise them and write up a commendation,” Rivera said.

Berthia, the mental health advocate, went to the bridge in 2005 with the intent to end his life. His encounter over the railing with a California Highway Patrol officer was captured in a photograph published on The San Francisco Chronicle’s front page. The picture haunted him for years.

Now, Berthia speaks nationally about suicide prevention, and says there's a long way to go on mental health awareness. Still, his message to people in crisis is a hopeful one. Pedestrians walk across the George Washington Bridge, underneath netting designed to prevent jumping off the bridge, in New York. In recent years, officials who oversee so-called suicide hotspots like San Francisco’s Golden Gate Bridge and the George Washington Bridge, which spans New York City and New Jersey, have worked to install prevention or deterrent systems. — AP

Retired California Highway Patrol officer Kevin Briggs poses below the Golden Gate Bridge near Sausalito, Calif. Briggs responded to many suicide attempts on the Golden Gate Bridge during his career. He met Kevin Berthia in 2005 when Berthia attempted suicide and now the two speak nationally about suicide prevention. Briggs joined the CHP in 1990 and began responding to emergencies on the bridge in 1994, where he would work with people in crisis four to six times a month. He retired in 2013. — AP

Berthia, who has survived his own suicide attempts, poses in Sacramento, California. Berthia has turned his experience, including a suicide attempt on the Golden Gate Bridge, into advocacy for other people in crisis. — AP

People walk past an emergency phone and numbers for crisis counseling on the Golden Gate Bridge in San Francisco. In recent years, officials who oversee so-called suicide hotspots like San Francisco’s Golden Gate Bridge and the George Washington Bridge, which spans New York City and New Jersey, have worked to install prevention or deterrent systems. — AP

The lower Manhattan skyline is seen through the fence and netting covering the pedestrian walkway on the George Washington Bridge in New York. In recent years, officials who oversee so-called suicide hotspots like San Francisco’s Golden Gate Bridge and the George Washington Bridge, which spans New York City and New Jersey, have worked to install prevention or deterrent systems. — AP

Retired California Highway Patrol officer Kevin Briggs looks out at the Golden Gate Bridge near Sausalito, Calif. Briggs responded to many suicide attempts on the Golden Gate Bridge during his career. He met Kevin Berthia in 2005 when Berthia attempted suicide and now the two speak nationally about suicide prevention. Briggs joined the CHP in 1990 and began responding to emergencies on the bridge in 1994, where he would work with people in crisis four to six times a month. He retired in 2013. — AP 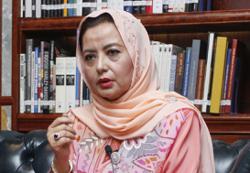