The 23-year-old fell from a height of about 50 metres into the space of the apartment and was pronounced dead at the scene shortly after the fall. — AFP

ISTANBUL: A 23-year-old woman, who went to visit her cousin in Turkey’s Istanbul, died after falling through the roof of a building while shooting a video for social media platform TikTok on Friday.

Her cousin recorded the moments of the dramatic death of Kubra Dogan in Esenyurt district, according to Anadolu Agency (AA).

Dogan and her cousin Helen decided to go to the roof to watch the sunset and shoot a video on Tik Tok. They spent some time on the roof taking photos and videos.

Later, when Dogan wanted to get off the edge of the roof, she stepped on a plastic panel. Unable to bear the weight of nature, the panel collapsed.

The young girl fell from a height of about 50 metres into the space of the apartment.

Helen then informed Dogan’s family. Health and police teams were dispatched to the scene after a call from the family. The young woman was pronounced dead at the scene shortly after the fall. – Bernama

Filming and posting your resignation, the #QuitMyJob trend

Reddit takes inspiration from TikTok for its new feature 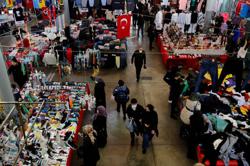