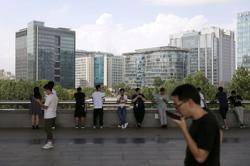 Sumo's shareholders will get 513 pence in cash per share, Tencent said. The offer is at 43% premium to the Sumo's last closing price of 358 pence. The share has risen multifold since its listing on LSE's junior market AIM in 2017 at 100 pence.

Tencent has an 8.75% stake and is the second-biggest stakeholder in the company, which has 14 studios in five countries with more than 1,200 employees.

(Reporting by Muvija M in Bengaluru; Editing by Saumyadeb Chakrabarty and Arun Koyyur)