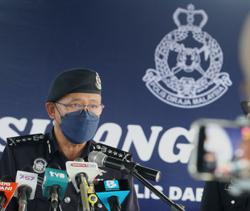 A file photo of a person using a smartphone. Selangor police said the job scam syndicate approaches victims by messaging them on WhatsApp. — AFP

PETALING JAYA: An online job syndicate targeting the public via WhatsApp has cost victims approximately RM219,271.15 in financial losses, according to a statement by the Selangor Commercial Crime Investigation Department (CCID).

Selangor CCID chief Asst Comm Muhammad Yazid Muhammad Yew said the department has opened 23 investigation papers related to the syndicate, based on its records from Feb 6 to April 20 this year.

He explained that members of the syndicate will pose as part-time work agents, claiming they represent e-commerce platform Lazada.

These scammers will message victims via WhatsApp through an unknown number, offering them an opportunity to make a profit of between 8% to 15% by performing some online tasks.

The task requires victims to make payments for items that the fraudsters claim are being sold on Lazada. By purchasing the item, the victim is made to believe that they are working as an ‘online purchasing agent’ to help boost the ratings of the item advertised on the platform.

The payment will be made to the syndicate’s bank account without going through the e-commerce platform.

According to the statement by the police, victims will usually receive their commission along with the cost of the item as promised by the scammers for the first two tasks. However, after the third and subsequent tasks, the scammers will begin making excuses to delay payments and will eventually become unreachable altogether.

Selangor police urged members of the public to be wary of job opportunities being offered by others online, adding that the public should use the Semak Mule mobile app and website to check if any bank accounts or phone numbers have been associated with suspicious activities so as to avoid falling victim to scams.