A Ukrainian national, part of hacking group FIN7, was sentenced to a decade in the US prison system for his role in compromising millions of financial accounts. — 123rf

A Ukrainian national arrested for his role in a hacking group that compromised millions of financial accounts was sentenced to a decade in prison, US prosecutors said Friday.

Fedir Hladyr, 35, had a high-level role as a manager and systems administrator for a hacking group known at FIN7, authorities said.

He was one of three Ukrainians arrested in mid-2018 for hacking more than 100 US companies and stealing millions of credit and debit card numbers, according to the Justice Department.

"The defendant and his conspirators compromised millions of financial accounts and caused over a billion dollars in losses to Americans and costs to the US economy," acting Assistant Attorney General Nicholas McQuaid said in a release.

Hladyr was arrested in Germany, then extradited to Seattle where he pleaded guilty in 2019 to conspiring to commit computer hacking and wire fraud, according to authorities.

"This criminal organization had more than 70 people organized into business units and teams," prosecutor Tessa Gorman said in the release.

"This defendant worked at the intersection of all these activities and thus bears heavy responsibility for billions in damage caused to companies and individual consumers."

In the US alone, FIN7 stole "more than 20 million customer card records from over 6,500 individual point-of-sale terminals at more than 3,600 separate business locations," according to prosecutors.

Among the companies which have publicly disclosed hacks by FIN7 are Chipotle Mexican Grill, Chili's, Arby's, Red Robin and Jason's Deli.

"FIN7 carefully crafted email messages that would appear legitimate to a business' employee, and accompanied emails with telephone calls intended to further legitimize the email," prosecutors said at the time of the arrests.

Once booby-trapped files attached to emails were opened, they would trigger malware to steal payment card data which was sold on online underground marketplaces. – AFP 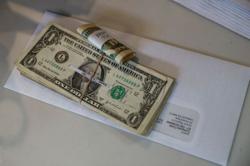