A video of a food delivery to a filthy flat went viral after netizens shared the footage on social media, shocked at the sheer squalor. — Screenshot/TikTok

While it’s usually customers who demand good hygiene for food delivery, the shoe was on the other foot for a rider who had to deliver food to a flat in horrid conditions.

In a viral TikTok video, the rider shared the appalling state of the flat he had to deliver to, with piles of garbage strewn all over the common area and staircase.

He explained that the customer insisted he come up with the delivery, and being too tired to argue, he agreed to deliver to their doorstep.

He added that the lift was out of order, thus he had to take the stairs up.

MStar reported that the flat was believed to be in Penang, adding that the unsanitary conditions drew the ire of Internet commenters on TikTok and Twitter.

Commenters criticised the residents of the flat, asking if they had functioning noses, or brains.

Some commenters also showed support for the rider, saying they felt sorry he had to face such an appalling scene while doing his job.

The video had gotten over 200,000 views since last Thursday, after being uploaded on TikTok and then cross-posted to Twitter. 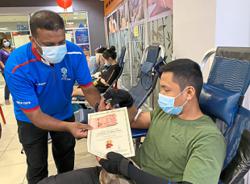