By Masha Borak and Minghe Hu

Ele.me promises safety upgrades after a self-immolation and the death of a driver has again put gig economy in the national spotlight. More than 60% of delivery drivers do not have access to social security in China, a legally mandated expense that employers sidestep with gig workers. — SCMP

Recent tragedies in China’s food delivery industry have again pushed the gig economy into the spotlight, as the public contemplates the plight of the nation’s delivery drivers and some gig workers call for better legal protections.

Back-to-back incidents involving couriers for Ele.me – the food delivery company owned by Alibaba Group Holding, the parent company of the South China Morning Post – became the most recent catalyst for online debate. Two weeks ago, a delivery driver died while on the job. Then last week, a 48-year-old courier surnamed Liu set himself on fire in protest over unpaid wages.

The courier from southwest Yunnan province was working in Taizhou, a city in the coastal province Jiangsu, north of Shanghai. He worked for a third-party employment company delivering orders for Ele.me, according to a statement from the government published on its official WeChat account last week. Liu is being treated at a local hospital and is in stable condition, the government said.

“If you don’t make some noise like this, no one will care about you. He must have been desperate,” said a 36-year-old named Hu, who works as a courier in Zhangjiakou, Hebei. Hu has also worked as a courier in Beijing for five years, he said

“The government should legislate to protect our rights, even if we are employees for third-party platforms,” said another courier named Pei, an Ele.me gig worker in his 30s. “They can’t just turn a blind eye to us like they are doing right now.”

News of the self-immolation came just one week after the death of the Ele.me courier who collapsed on the job. Ele.me initially offered just 2,000 yuan (RM1,248) in compensation, sparking a public outcry. Ele.me said that it did not have a labour relationship with the courier and did not bear any legal responsibility for his death. After the backlash, however, the company increased compensation to the worker’s family to 600,000 yuan (RM374,514).

After the self-immolation, Ele.me launched a nationwide safety upgrade and paid for Liu’s treatment, but the company did not disclose details of the negotiation between Liu and its logistics partner. The food delivery giant said its platform strictly prohibits cooperative agencies from defaulting on rider delivery fees for any reason.

Still, these incidents reignited old debates about gig economy workers. Unpaid wages have been a frequent problem for food delivery workers, according to Aidan Chau, a researcher at the China Labour Bulletin, a Hong Kong-based NGO that defends worker rights in China.

“It’s pretty common, especially when workers are employed by the contractors, since these companies normally have a relatively small amount of cash flow,” Chau said.

About 60% of food delivery couriers were making less than 9,000 yuan (RM5,617) per month last year, according to a report published in November by the Data Centre of China Internet (DCCI).

To solve their labour disputes, delivery workers, who mostly hail from poorer, less-developed parts of China, have taken their issues to company headquarters. But companies often end up deflecting responsibility back to the contractor, causing gig workers to take their issues to the labour bureau, media outlets or the streets.

“Now if something goes wrong, the food delivery platform and the third-party platform just find legal loopholes to shirk responsibilities to each other,” Pei said.

When asked how he would solve the issue, Pei said that he would likely speak to the relevant authorities. If this did not work, he would probably give up on the money, he said. 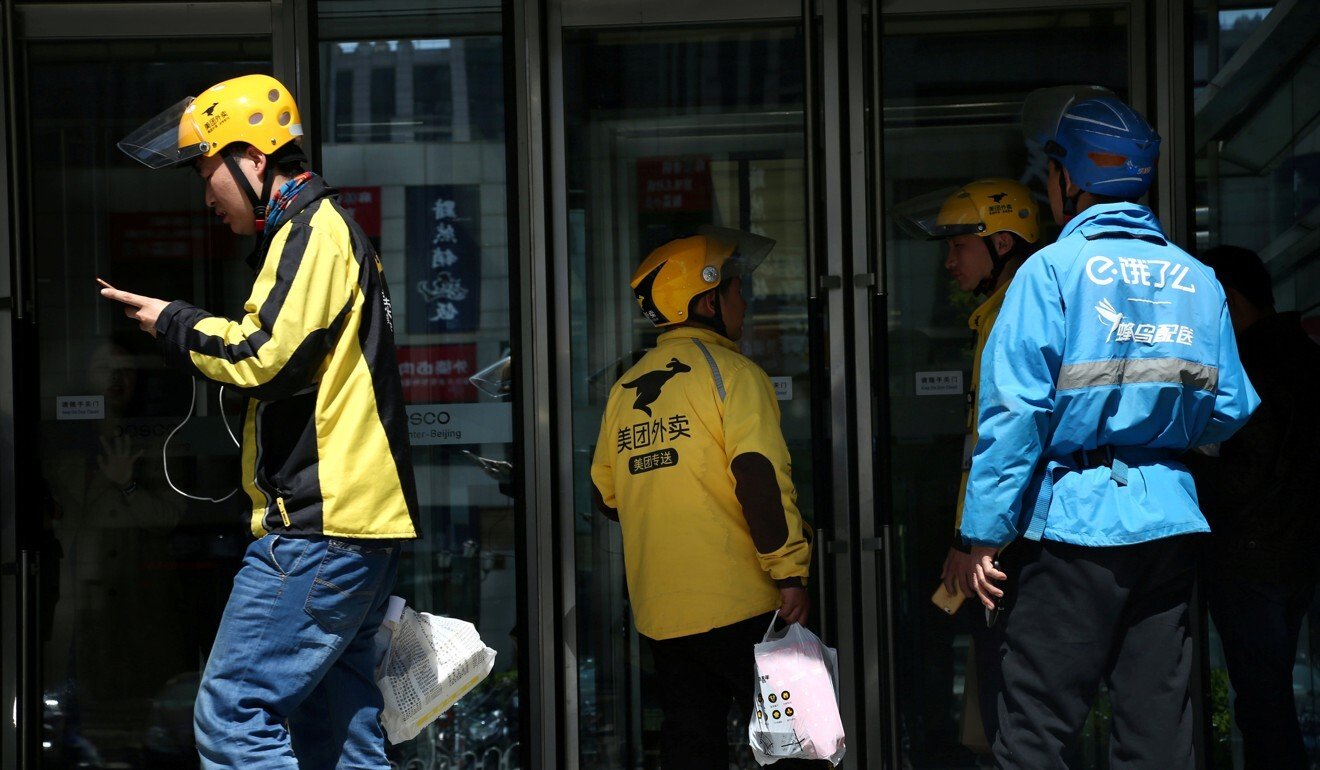 Contracts specifying that there is no labour relationship between the company and the worker are common in China’s food delivery industry, Chau said. These contracts also mean workers lack social insurance protections.

Another way gig workers find work in the industry is through agencies that may provide more stable employment, Chau said.

“The couriers have created huge wealth for the sector, but their own interests are being damaged in the long run without basic benefits,” Zhao Xiaomin, an investor and independent researcher in China’s logistics sector, told the Post in October. “The lack of benefits also explains why people usually take this as a temporary job.”

On-demand delivery companies like Meituan and Ele.me have also been expanding beyond just food, offering products like books and cosmetics to be delivered at the click of a button. Ele.me now has more than three million drivers handling on-demand deliveries.

Over the years, major food delivery companies have come under fire for the treatment of gig workers. In addition to unpaid wages, safety has been another issue that has frequently made headlines. As the food delivery industry ballooned in recent years, so have the number of traffic accidents involving delivery drivers rushing to fulfil their quotas.

The lack of social security benefits has also recently received increased attention. State-owned news agency Xinhua published an investigation on the issue on Saturday, describing it as a “legal rights black hole”. More than 60% of delivery drivers did not have access to social security, the report said, citing a survey from November.

The survey was conducted by Sophie Sun Ping, an assistant professor at the Department of Journalism and Communication at the Chinese Academy of Social Science. Sun told Xinhua that flexible employment could become important to more industries in the future. But the issues over access to social security remain unsolved, she said, which could hurt economic development.

Under Chinese law, employers are required to make monthly contributions to social security and insurance programmes for full-time employees, which includes coverage for work injuries.

Despite pressure from the public and unions, there has been little incentive for platforms to change their practices. Workers may also not invest the time and effort to push for change when many see the jobs as temporary as they wait for better opportunities to come along.

“Workers have been very fluid and very flexible in this industry, and a lot of workers come and go maybe in a month or three months,” Chau said. – South China Morning Post