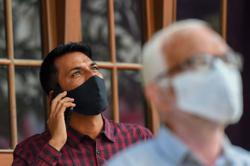 A girl and a woman check a mobile phone in front of a mural representing frontline warriors of the Covid-19 coronavirus, painted on a wall along the roadside in New Delhi on December 19, 2020, as India surged past 10 million coronavirus cases. (Photo by Sajjad HUSSAIN / AFP)

Hike, the messaging app backed by SoftBank Group Corp that aimed to compete against WhatsApp in the world’s second-most populous country, shut down and vanished from app stores on Jan 18.

The startup valued at US$1.4bil (RM5.67bil) in a 2016 funding round announced its app was going off the air earlier this month without explanation. The app started by billionaire-family scion Kavin Bharti Mittal has failed over several years to displace Facebook Inc’s rival app as India’s go-to venue for social media and mobile communications. The country remains WhatsApp’s largest market globally.

Hike, backed also by Chinese WeChat-operator Tencent Holdings Ltd, has in recent years ventured into adjacent areas such as no-frills phones and expanded even into spheres such as mobile entertainment. On Jan 6, Mittal – son of Sunil Bharti Mittal, chairman of India’s No. 2 telecom carrier, Bharti Airtel Ltd – announced the closure of Hike StickerChat.

Its demise coincides with a growing global backlash among technology experts, privacy advocates, billionaire entrepreneurs and government organisations against WhatsApp’s new policy of reserving the right to share user data with the broader Facebook network.

Over the past year or more, Mittal has steadily diversified Hike into social and virtual-mobile products. His company will continue to develop its Vibe social media app and work on a new gaming product called Rush, he wrote on Twitter.

“India won’t have its own messenger,” Mittal wrote. “Global network effects are too strong (unless India bans Western companies).” – Bloomberg