Amazon’s other reason for booting Parler: threats to staff

By Joel Rosenblatt and Chris Dolmetsch Amazon.com Inc says Parler LLC isn’t only dangerous to law and order in the nation’s capital, but to the tech giant’s own staff.

To justify to a judge why it suspended web-hosting service for the conservative social media site, Amazon executives cited threats by Parler users to delivery drivers and staff at the e-commerce giant – as well as concern that Parler failed to police violent content both before and after the Jan 6 riot at the US Capitol.

A showdown looms Thursday in Seattle federal court over Parler’s complaint that Amazon’s action is a politically loaded attack on an upstart’s efforts to compete with social media behemoths Twitter and Facebook.

While Amazon Web Services argues Parler has only itself to blame for being knocked offline, Parler countered in a court filing Wednesday it was blindsided by the suspension and that AWS hasn’t shown beyond speculation that the platform was used to incite last week’s riot.

Two unidentified Amazon executives submitted statements in court filings about Parler users “posting threats of physical violence to Amazon delivery drivers, Amazon facilities, and Amazon executives”. They each wrote: “As a result of these threats and similar threats against employees of other companies that have suspended Parler or others from their services, I am concerned for my safety, as well as the safety of my colleagues.”

AWS said it voiced concerns to Parler in November about information on its platform threatening violence, and that after issuing a warning about the Jan 6 riot, AWS continued to see “problematic content”. In response, AWS said, Parler described steps that would rely “almost exclusively on volunteers”.

“We explained that given the events at the US Capitol Building and the threats regarding the upcoming inauguration, we had real concern about this content leading to more violence,” one of the executives wrote, adding that the company doubted Parler’s response would be effective.

“Amazon likely has little to fear from the antitrust lawsuit filed by Parler after AWS suspended its contract with the social-media company. The complaint, alleging a concerted refusal to deal, lacks basic facts that must be plead to sustain such claims. The dispute is a commercial one, if anything, yet Parler’s breach of contract claims seem weak too,” said Jennifer Rie, senior litigation analyst at Bloomberg Intelligence.

As of Monday when Parler filed its lawsuit, no one arrested for the riot had an account with the platform, according to Wednesday’s filing.

Ashli Babbitt, the woman killed by law enforcement when she forced her way into the Capitol Building, had a Parler account, the platform acknowledged, but said it hasn’t been used since November. Highlighting its allegation that Amazon is exercising a double standard by singling out Parler for criticism, Parler said Babbitt used her Twitter account Jan 6, the day of the riot.

“Even the government claims that the attack was coordinated in part by Twitter,” Parler said in Wednesday’s filing.

AWS is by far the largest cloud-computing provider, and its on-demand software services are the backbone for many of the most popular Internet services. Parler has “no other options” to be on the Web, it said in the suit. – Bloomberg

Parler sues Amazon over removal from servers after riot 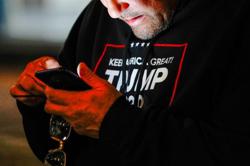