Can you beat a virtual Beth Harmon from ‘The Queen’s Gambit’ in a game of chess?

A photo of the webpage of Chess.com showing more than 46 million members with 7.5 million matches played today and over 158,000 people online. Hit miniseries 'The Queen's Gambit' has led to a surge of interest in chess, with one popular website registering millions of new players and academies reporting unprecedented demand. — AFP

Website Chess.com is letting users play against a virtual or bot version of Beth Harmon, the popular character from the hit show The Queen’s Gambit.

Users can choose to play against Harmon at seven different stages in her life, with the difficulty level increasing as she gets older.

Whichever virtual version that users choose to compete against, the website lets them decide if they want to play in an assisted mode (you get to cheat by taking back some moves or follow some suggestions) or play without any assistance at all.

The game also has other interesting features, such as virtual Harmon responding to some of your moves. Eight-year-old Harmon would cry that it’s not fair when she loses a Queen, while world championship-playing Harmon would say you’re wasting her time when you don’t play a good opening. It can be devastating when Harmon says your moves don’t scare her at all. 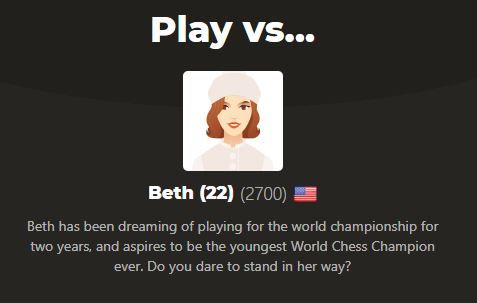 Users can 'cheat' in the game by playing in assisted mode. — Screengrab from website

It also has a bar to indicate your chances of winning and list the type of moves that both players are making on the board. When it’s time to throw in the towel, users can click on the flag symbol at the bottom right corner of the game to resign.

The Queen’s Gambit tells the story of Harmon (played by Anya Taylor-Joy), an orphan working her way towards international fame as a chess player. Along the way, she struggles with addiction to drugs and alcohol.

‘Assassin’s Creed Valhalla’: Inside the making of lead character Eivor