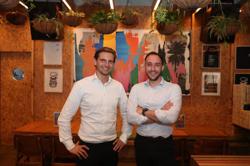 Late last week, KFC announced that the company is working on developing "the meat of the future", also known as 3D bioprinted chicken nuggets.

As the demand for plant-based meat alternatives continues to increase, KFC is one of the latest restaurant chains to jump on the faux-meat bandwagon; on July 16, the company announced its plans to develop "innovative 3D bioprinting technology to create chicken meat in cooperation with the 3D Bioprinting Solutions research laboratory," which means your Kentucky Fried Chicken nuggets may not be made from chicken much longer.

Instead, these nuggets are slated to become the world's first nuggets to be produced in a lab – no chicken required – and will look and taste as close to KFC's existing product as possible.

To accomplish this, KFC will be partnering with 3D Bioprinting Solutions, who is "developing additive bioprinting technology using chicken cells and plant material, allowing it to reproduce the taste and texture of chicken meat almost without involving animals in the process."

Some benefits of making and consuming biomeat as opposed to traditional meat is that the product is cleaner and more ethically produced, as no animals are harmed in the making of it. Furthermore, the creation of such goods has minimal impact on the environment compared with farming – energy consumption and greenhouse gas emissions can both be drastically reduced using this method.

A final product that will undergo testing is expected to be complete in Moscow by this fall. – AFP Relaxnews