A desert locust in Samburu County, Kenya, in January. India, battling its worst desert locust outbreak in decades, pressed into service 12 drones to track the movement of locusts and spray insecticides on the swarms. – Reuters

NEW DELHI: India on June 30 deployed a helicopter and a dozen drones spraying insecticide to stop desert locusts that have spread to nine heartland states of the world's second-biggest producer of rice and wheat.

The move came after swarms invaded Gurugram, a satellite city of the capital New Delhi, during the weekend, prompting people to criticise authorities for not quickly containing the outbreak.

India, battling its worst desert locust outbreak for decades, pressed into service 12 drones to track the movement of locusts and spray insecticides on the swarms.

The Ministry of Civil Aviation has amended rules to allow state government officials to use drones at night, a step that experts have said may help neutralise the locusts.

The government had already been using specialist vehicles and fire engines for spraying operations in at least nine densely populated states in the north, centre and west.

The locust infestation has not caused significant damage so far because it has fallen in the lean season – the gap between the previous harvest and the next planting season. But some farmers have complained about crop losses in a few districts of the desert state of Rajasthan.

The federal government said it had provided financial assistance to the Rajasthan government against the locusts.

It said representatives from India, Iran, Pakistan and Afghanistan have had weekly talks to try to stem locust swarms across the wider region.

The UN Food and Agriculture Organization has warned of a new wave of locusts coming across the Indian Ocean from Somalia just as farmers are planting an array of summer crops. – Reuters

Tewatia keen to make most of new role at Rajasthan Royals 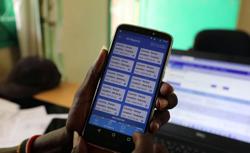