Locusts swarming in Ajmer, Rajasthan, India. A small swarm can eat enough food to feed 35,000 people in one day, according to the UN FAO. — AP

NEW DELHI: From deploying drones and fire trucks to banging utensils and blaring loud music, India is experimenting with ways to battle a new wave of locust attacks that have alarmed farmers.

Millions of locusts have engulfed India's seven heartland states, including the western desert of Rajasthan, and threaten vegetable and pulse crops such as lentils and beans.

"We have never ever seen what we have in the last six months in India... never in the history," said Bhagirath Choudhary, director of the New Delhi-based South Asia Biotechnology Centre, an agriculture think-tank.

But the fresh swarms have arrived at a time when the government is trying to contain the spread of the coronavirus and reeling from economic fallout associated with pandemic restrictions.

India's lockdown – introduced in late March – has pushed millions into hunger and poverty as they lose their livelihoods and left farmers unable to harvest, bag and move their crops because of labour shortages and logistical challenges.

The country is battling its worst desert locust outbreak in decades with swarms radiating through much of the western states of Gujarat, Rajasthan and Maharashtra, the central states of Madhya Pradesh and Punjab, and Haryana and Uttar Pradesh in the north.

States in India's east and south have been on alert too.

The last major locust surge was in 1993, when heavy rains created favourable breeding conditions for the insects along the India-Pakistan border.

Most years the winged invaders destroy crops in parts of Rajasthan close to the border but farm experts say it is rare for them to move further into the state and other non-desert areas of India.

Their wider distribution this year has bewildered residents and farmers, who have resorted to rudimentary efforts to scare the pests away.

Some have mounted their tractors with insecticide sprayers or banged steel pots and plates, while others have lit fireworks or played loud music on speakers in the middle of their fields.

A farmer in Uttar Pradesh rolled out a mobile disc jockey system, normally used at weddings.

Locust swarms can fly up to 150 km (90 miles) a day, and the adult insects can consume roughly their own weight in fresh food each day.

A small swarm can eat enough food to feed 35,000 people in one day, according to the UN Food and Agriculture Organization (FAO).

"Farmers are crying, they don't know what to do... it's like a natural disaster," Choudhary said.

India's state-run Locust Warning Organisation, which is responsible for locust survey and control operations, did not respond to requests for comment.

Last week, Delhi and neighbouring districts were put on high alert for a possible locust invasion, with authorities urging residents to shut their windows and doors tight.

"Farmers are advised to collectively beat drums, tin containers (and) steel plates and use loudspeakers to prevent locusts from descending on farms and damaging crops," Suhas LY, the magistrate of Gautam Buddha Nagar district, said via Twitter.

Locusts have caused extensive damage to pastures and crops and threatened food security in East African countries including Somalia, Ethiopia, Kenya, Eritrea and Djibouti this year.

Despite large-scale incursions by the insects, the Indian government and farm experts do not foresee major crop damage for the moment as the pests have arrived during the gap between the previous harvest and the next planting season.

But experts warn that federal and state governments need to kill the pests quickly over the next few weeks to ensure they don't breed again and then devour summer crops.

If the insects continue to multiply, India could see extensive losses in June and July when monsoon rains spur sowing of rice, sugarcane, corn, cotton and soybean crops, they said.

"The new wave of locusts could pave the way for more food insecurity, which will leave more people at risk of starvation," said Andre Laperriere, the executive director of Global Open Data for Agriculture and Nutrition (GODAN).

"We are not in a plague situation, but it could get much worse," he said.

Choudhary of the South Asia Biotechnology Centre said the warnings should serve as a "wake-up call" to take more action to save crops.

Authorities in the affected states have been trying to contain locust swarms by spraying chemicals, using vehicles from tractors to fire trucks, the agriculture ministry said in a statement last week.

The government said it was arranging drones to drop pesticides on trees and in inaccessible places to kill the insects. It also plans to use helicopters for aerial spraying.

Up to 15 sprayers will start arriving from Britain over the next two weeks and 45 more in one-and-a-half months, it said.

Farm experts said that while loud noises can briefly get rid of the pests, they do not amount to a sustainable plan and can make it more difficult for authorities to target and contain the pests.

"It's not killing any locusts, it's just shifting the problem to the neighbours," said FAO's Cressman.

He said chemical pesticides were the cheapest and most effective solution to tackle such large numbers of the insects.

Farmers can also dig trenches around their fields, in an effort to trap and bury newborn hoppers that try to march in and eat their crops, he said.

But he said controlling locusts is not a job for individual farmers but for well-trained government agencies equipped with technical know-how and the correct sprayers and safety gear.

Choudhary, however, urged the government to involve village councils and farmer communities in decisions about the pests, and to provide the right knowledge, pesticides, equipment and technology to help people monitor and fight locusts.

"Empowering and engaging local communities is an absolute must to deal with this big threat to Indian agriculture."

He said involving communities could lead to better data collection, including from crowd-sourcing platforms, which could then be combined with the weather office's wind data to provide real-time indications of the movement of swarms.

"Early preparation and data monitoring would be really helpful in preventing such outbreaks," he said. – Thomson Reuters Foundation 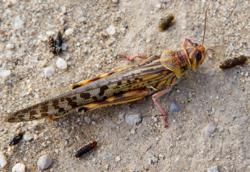