Congo mine deploys digital weapons in fight against conflict minerals

By Aaron Ross and Barbara Lewis

A man displaying a handheld scanner used by government agents to upload tracking data for bags of minerals to the cloud at the SMB coltan mine near the town of Rubaya in the Eastern Democratic Republic of Congo. — Photos: Reuters

RUBAYA, Democratic Republic of Congo: In a small shack overlooking muddy pits hewn out of eastern Congo's rolling green hills, a government official puts a barcoded tag on a sack of ore rich in tantalum, a rare metal widely used in smartphones.

With a handheld device linked to a server in the cloud, the agent scans the barcode, uploading data including the sealed bag's weight, when it was tagged, and by whom.

It's the latest initiative in eastern Democratic Republic of Congo to improve systems meant to show minerals entering global supply chains come from mines that don't use child labour or fund warlords and corrupt soldiers. 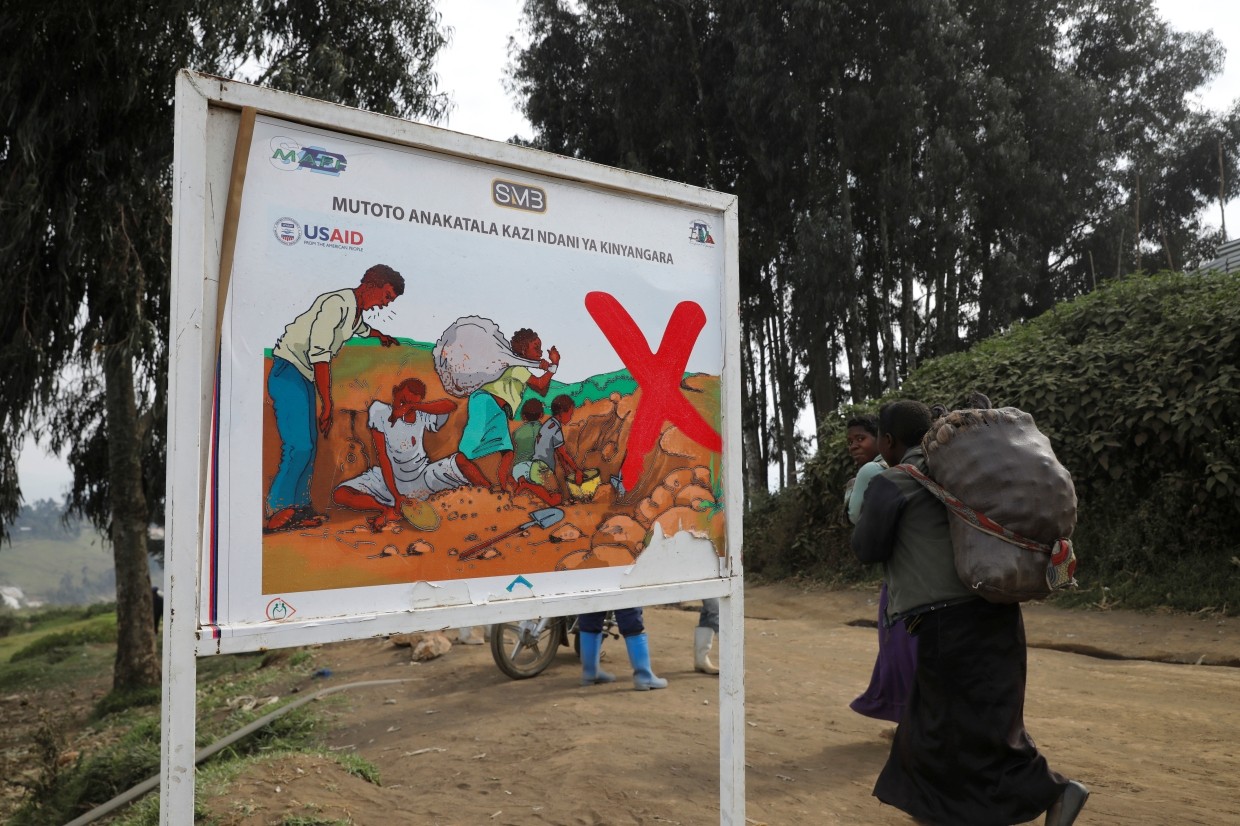 Women walking past a sign warning against a child labour at the SMB mine near the town of Rubaya in the Eastern Democratic Republic of Congo.

The new system developed by RCS Global, a company in Berlin that audits supply chains, started in January at Societe Miniere de Bisunzu's (SMB) mine near Rubaya, which has some of Africa's largest deposits of coltan, a tantalum-rich ore.

"It allows purchasers of SMB material to be sure that it actually comes from that mine site and is not smuggled into the supply chain from other mines, as much as possible," said Ferdinand Maubrey, a managing director at RCS.

Whether the new digital approach to tracing metals such as tantalum and cobalt succeeds is of keen interest to companies, especially carmakers like Tesla, General Motors and Ford, as regulators on both sides of the Atlantic put pressure on end-users to prove their supply chains are clean. 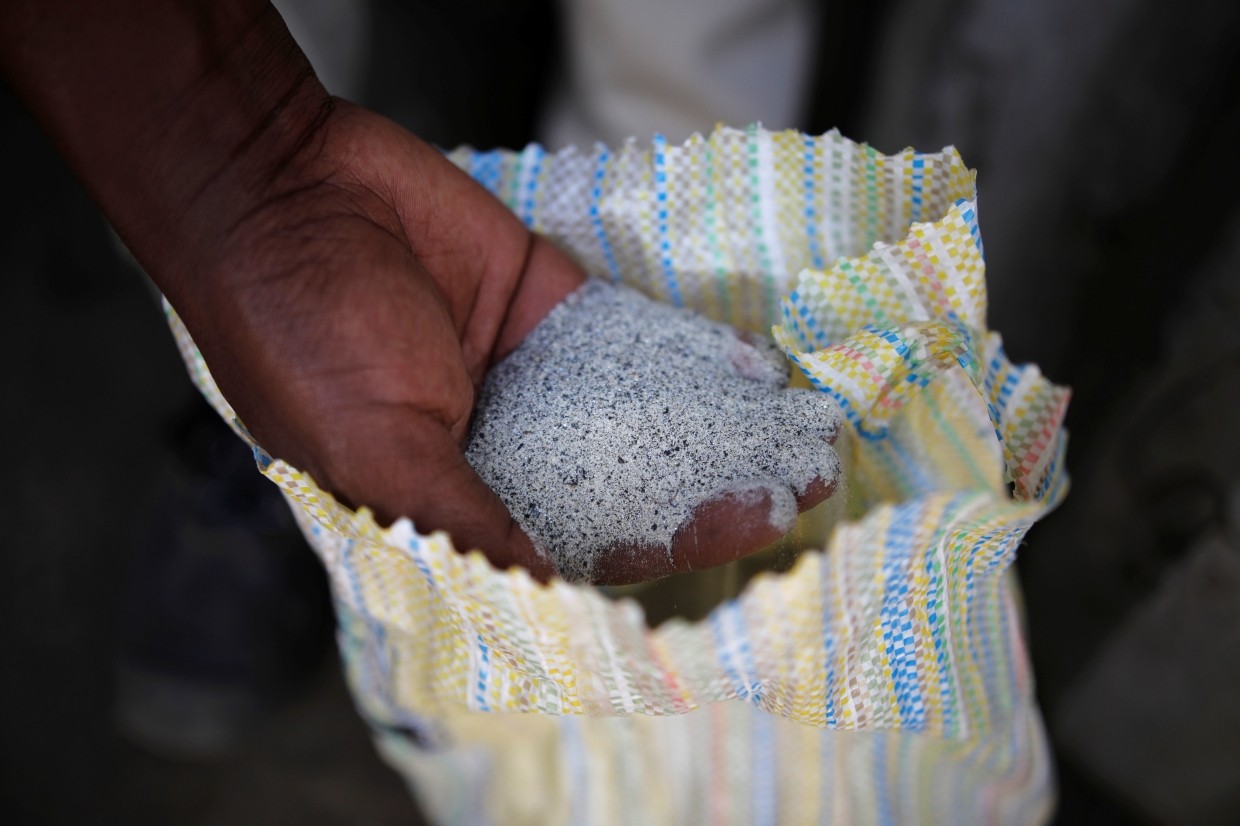 A man displaying a coltan ore at the SMB mine near the town of Rubaya.

Now, companies mostly rely on a paper-based certification scheme. But UN experts have documented cases of tags used to identify clean minerals being stolen in another part of eastern Congo and sold to smugglers – allowing them to pass off ore from blacklisted mines as responsibly sourced.

Maubrey said the new system had helped prevent tainted ore being mixed in with SMB's products by creating new obstacles. To use stolen tags, for example, a smuggler would also need to steal both the scanner and the laptop linked to it – which Maubrey said would be easily detected.

Even so, Maubrey conceded the system has limitations. For one, it does not use available technology to pinpoint the GPS coordinates of where the ore was tagged in real time, largely because of the high costs involved, he said. 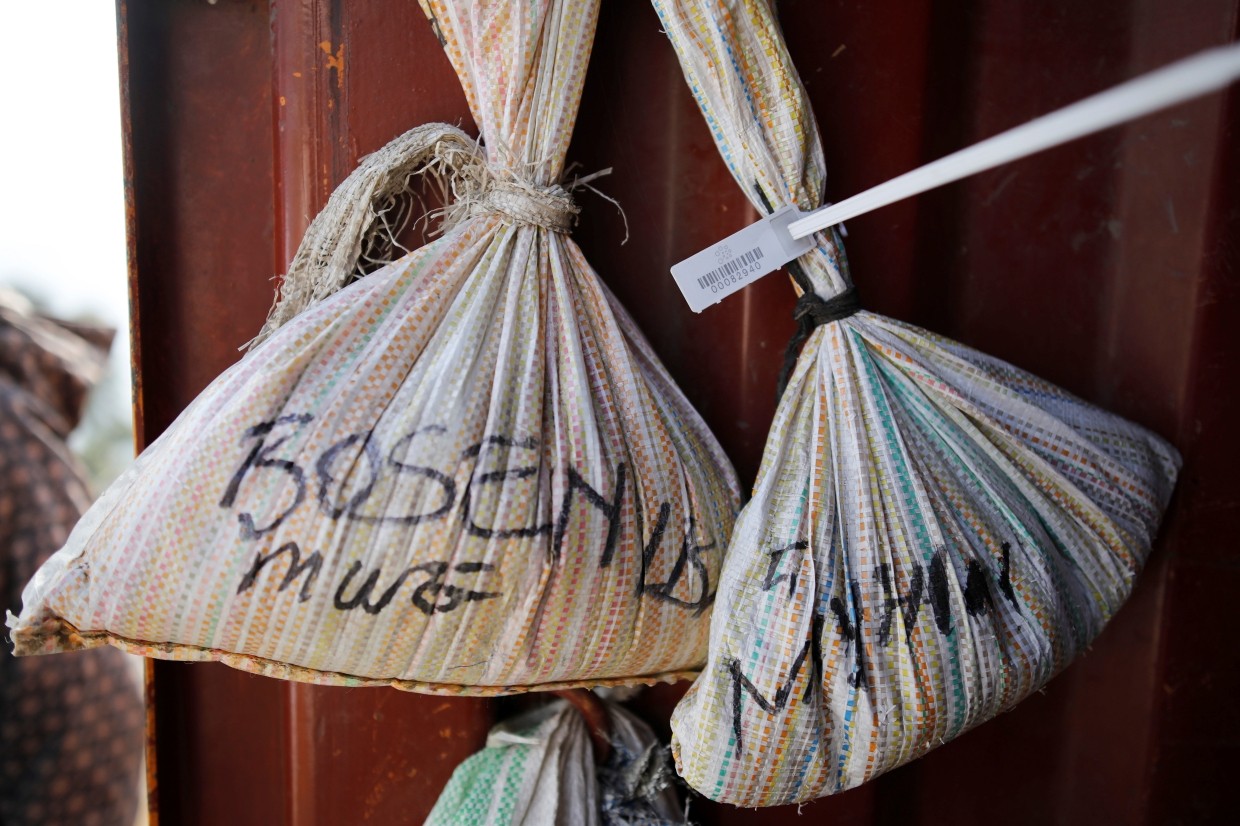 Sealed and labelled sacks of coltan ore hang at SMB coltan mine near the town of Rubaya.

SMB chief executive Ben Mwangachuchu also said digital systems could be corrupted if the government agents who tag bags conspire with smugglers to enter incorrect data from the outset.

"If they collude and say we are going to feed the information we want... for our own benefit, you will never know," he said.

Car companies and electronics firms such are all under pressure to show metals used in products such as laptops, videogame consoles or electric vehicle batteries are sourced responsibly.

In response to the role minerals from Congo and east African neighbours played in funding conflicts, the United States passed legislation in 2010 requiring US-listed companies to disclose whether their products contained any tantalum, tin, tungsten or gold from the region – and perform due diligence. 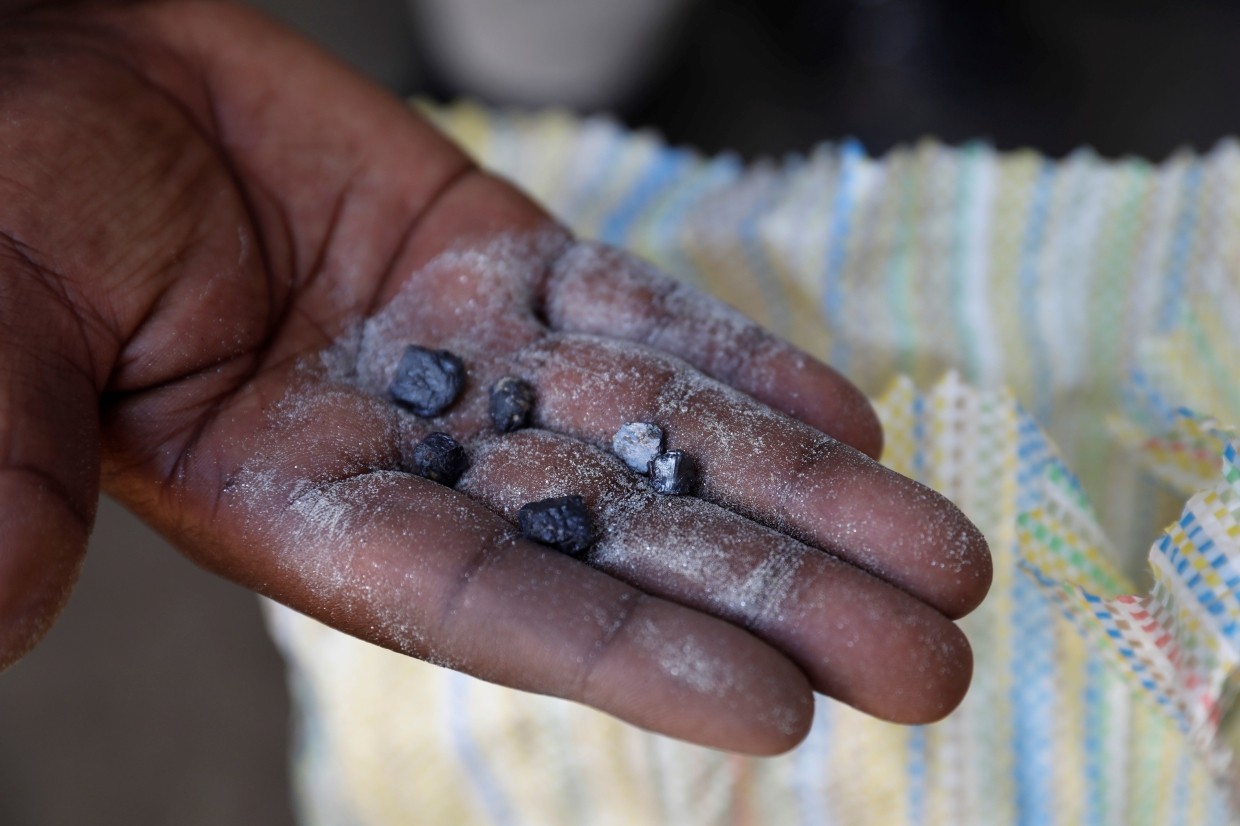 A man displaying coltan rocks at the SMB mine near the town of Rubaya in the Eastern Democratic Republic of Congo.

A similar European Union rule will take effect in 2021 and the London Metal Exchange could ban suppliers of metals that are not responsibly sourced by 2025.

The US Geological Survey estimates that Congo produced 39% of the world's tantalum last year.

Data from Congo's ministry of mines shows that SMB supplied ore last year to two smelting companies in Asia that Tesla, GM, Ford and Apple have said in public filings are, or may be, in their supply chains.

Asked by Reuters for comment, Tesla did not respond, Apple declined to comment and GM and Ford both referred to filings with the US Securities and Exchange Commission which outline measures they take to promote responsible sourcing – such as support for audits of smelters.

A report in April by the International Peace Information Service (IPIS) in Belgium and the Danish Institute for International Studies recorded interference by Congo's military or armed militias at 28% of the 711 mine sites they visited between 2016 and 2018 – including 20 mines being monitored by the dominant responsible sourcing scheme in Congo, ITSCI.

According to the report, interference at mine sites could mean direct control by army units or militias, or indirect influence through secret taxes or ownership stakes. 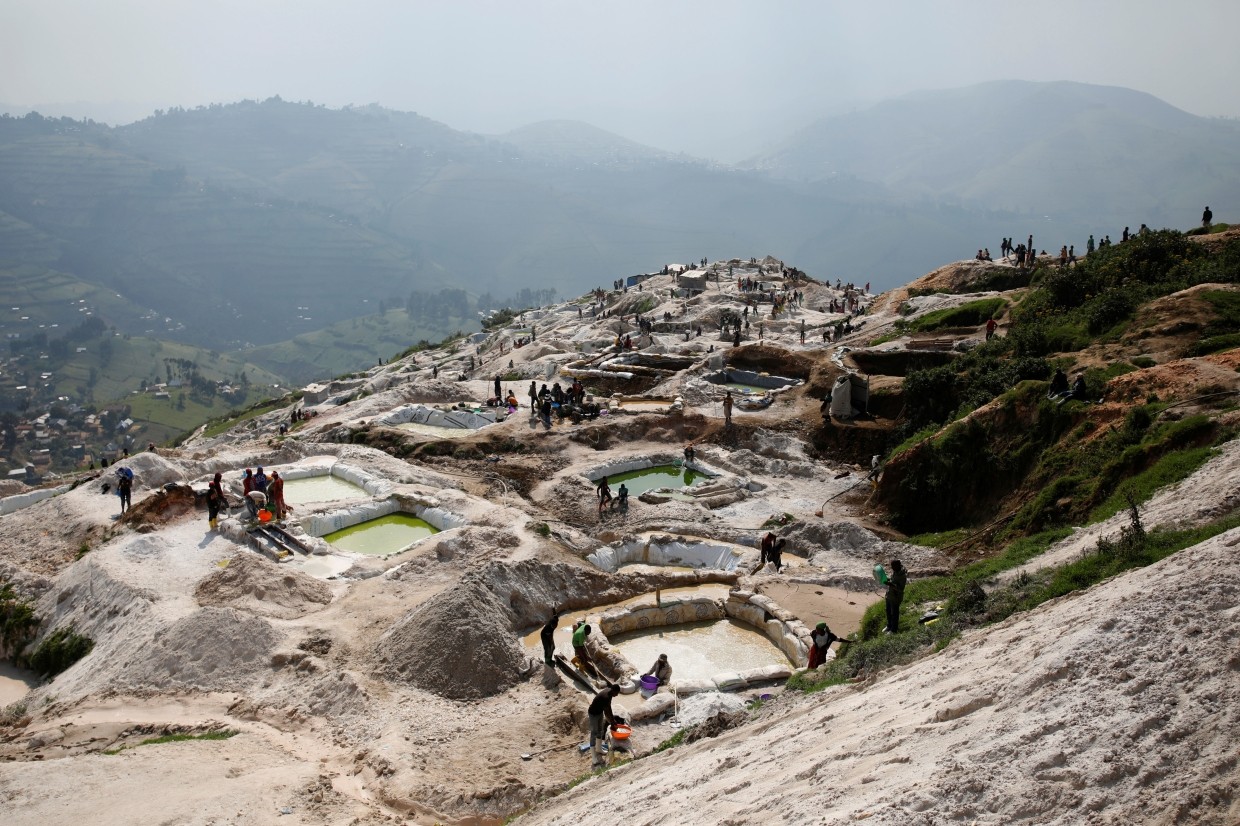 Labourers work at SMB coltan mine near the town of Rubaya.

Rene Masumbuko, the mine ministry's representative for the eastern Congo province of North Kivu, said armed interference at mines was rare, although he conceded government agents were not able to access some rebel-held areas.

Kay Nimmo, who heads ITSCI, an International Tin Association initiative, acknowledged cases of fraud. She said ITSCI was working to improve safe storage of tags and that the report found the system had made significant progress.

SMB turned to the new traceability scheme, known as the Better Mining programme, after leaving ITSCI in December.

At the SMB pit near Rubaya, miners in green and blue gumboots wash their ore in fast-flowing streams and haul it a few hundred metres to the tagging point, which has been moved closer to the pits to make monitoring easier. 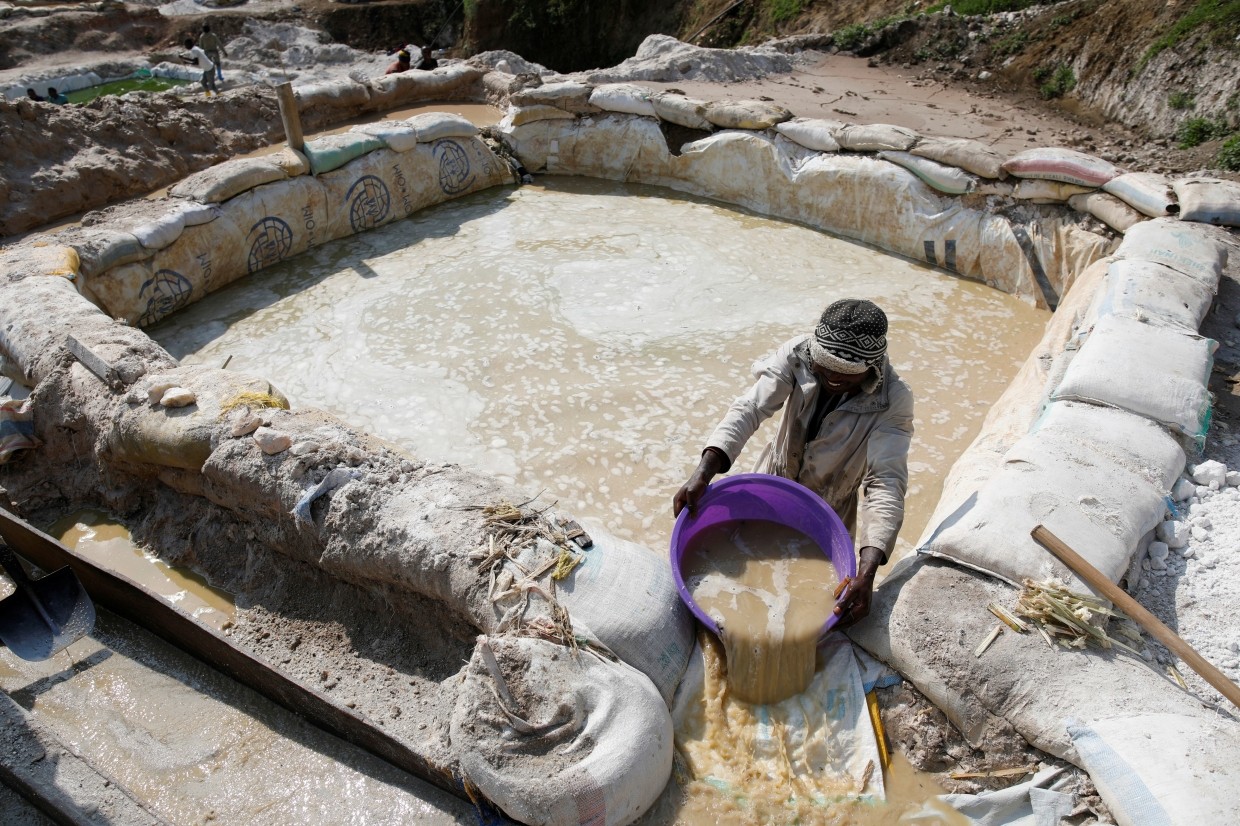 A man uses a basin to pour the water out of a pool as he extracts coltan ore at the SMB mine near the town of Rubaya in the Eastern Democratic Republic of Congo.

RCS employees implementing the scheme watch government agents as they attach and scan the tags and upload the data. The exercise is repeated as the bags travel to a nearby storage site, a warehouse to be sampled and priced, and on via Goma to the Indian Ocean coast for shipping to Asia.

Maubrey said RCS teams in Germany can review all the data in real time, which allows them to identify any anomalies, such as spikes in production, and report risks to buyers. 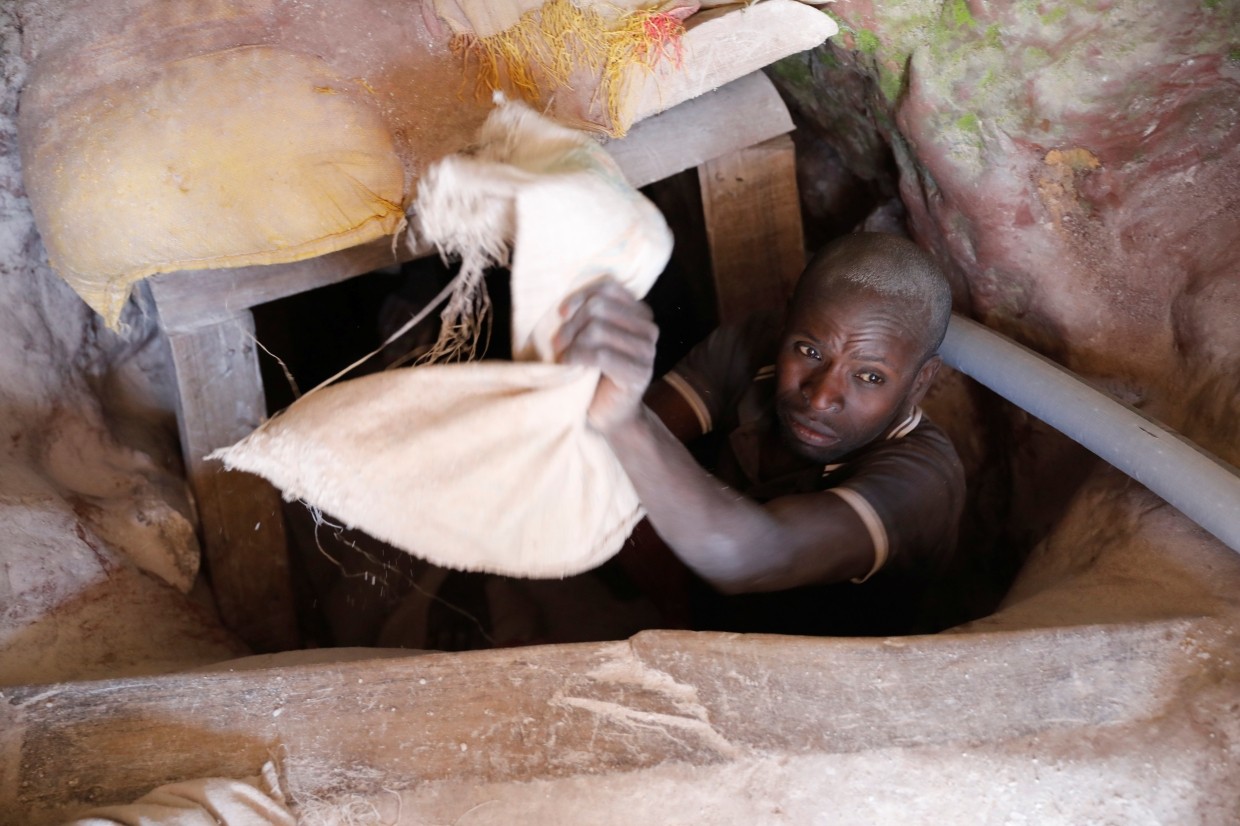 A miner works at the entrance of a shaft at the SMB coltan mine near the town of Rubaya in the Eastern Democratic Republic of Congo.

In southern Congo, RCS has partnered with companies including Ford and IBM to trace cobalt, a component in lithium-ion batteries. That system uses blockchain, the technology behind bitcoin, to create a tamper-proof record.

Circulor has also monitored mines in Rwanda using smartphones armed with GPS to pinpoint exactly where the ore was tagged and facial recognition software to confirm the identities of miners.

While those projects focus on less risky mines away from conflict zones, Circulor CEO Douglas Johnson-Poensgen said the innovations could be applied in eastern Congo.

ITSCI plans to introduce digital systems soon in Burundi, Rwanda and Uganda, while RCS operates its barcode system at two Rwandan mines. But both say it would be difficult to do the same across Congo due to poor infrastructure and high costs.

The certification schemes say they have limited resources as their funding comes mainly from members – predominantly miners, traders and smelters – rather than the wealthy multinationals that ultimately use Congo's minerals. 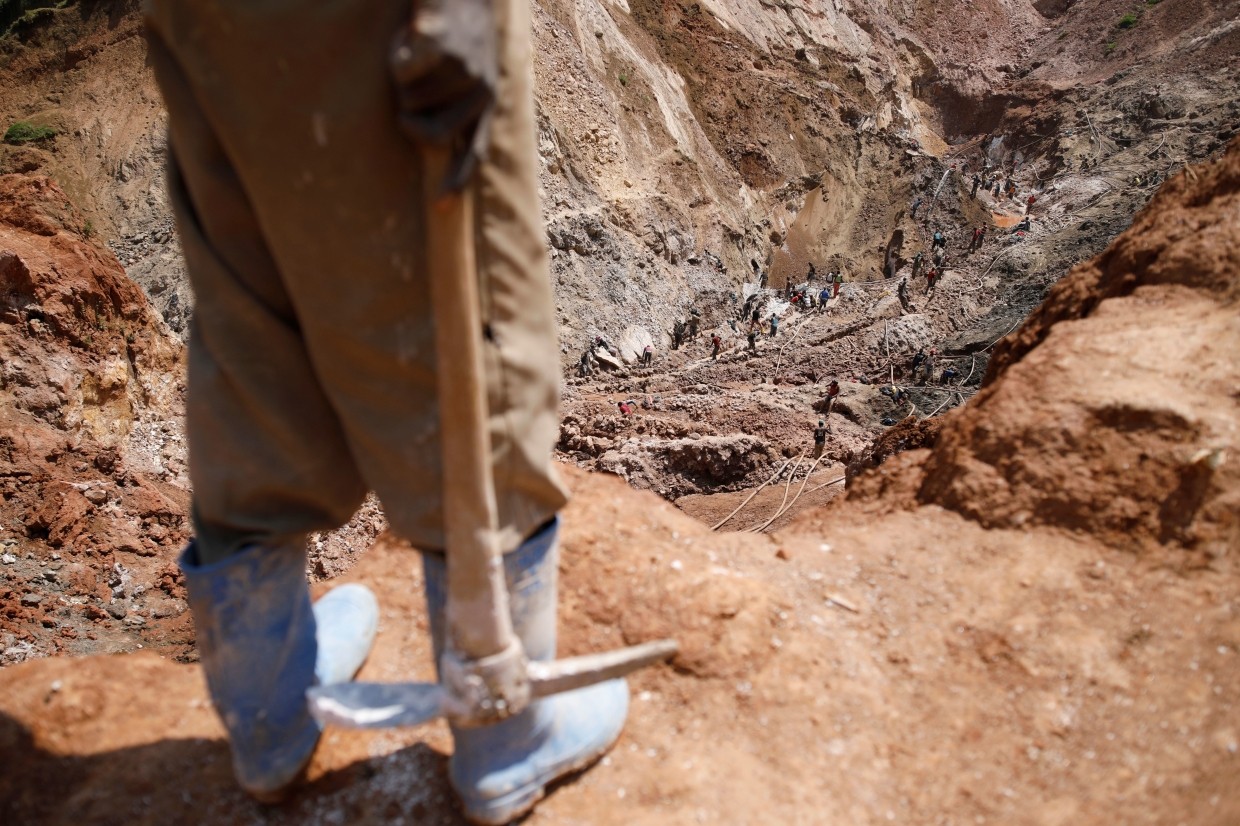 A man holding a pickaxe watches fellow labourers working at an open shaft of the SMB coltan mine near the town of Rubaya.

"Downstream companies and industry groups... are unwilling to pay to support measures that improve working conditions at mine sites," said Maubrey at RCS.

Johnson-Poensgen declined to say how much Circulor's projects cost but he said pricing was skewed towards the manufacturers further down the supply chain who most need to demonstrate responsible sourcing.

Major users of Congolese minerals did not respond to Reuters questions about whether they would be willing to pay more for better, more advanced, secure traceability schemes.

New sourcing schemes also face difficulties breaking into eastern Congo and neighbouring countries, as the market has been dominated since 2011 by ITSCI. – Reuters