Drones a game changer for US emergency responders

The new FLIR C360 Muve gas detector is seen on a DJI Matrice 210 drone, during a demonstration at the Los Angeles Fire Department ahead of DJI's AirWorks conference in Los Angeles, California. Drones are proving to be a game changer for emergency responders who are increasingly using the technology to spot fires, detect toxic gas or to locate missing people or suspects, experts say. — Photos: AFP

LOS ANGELES: Drones are proving to be a game changer for US emergency responders who are increasingly using the technology to spot fires, detect toxic gas or to locate missing people or suspects, experts say.

"Where we cannot go, we will now be putting an unmanned aircraft system (UAS). Where we can't see, we can now put a UAS," Richard Fields, battalion chief with the Los Angeles Fire Department, told AFP at a conference on drones this week in Los Angeles.

Fields said his department, one of the first major metropolitan fire departments to have a significant drone programme, has deployed the devices in at least 300 incident-related missions since 2017. Fields said his department, one of the first major metropolitan fire departments to have a significant drone programme, has deployed the devices in at least 300 incident-related missions since 2017.

"It fills the gap between helicopters in the sky and the boots on the ground," he said of the dozen drones used by his department.

"And it provides us with quick, accurate information that now allows us to make better decisions in deploying resources and mitigating the emergency.

The drones are able to cover large areas in little time, recording video via infrared technology that can help locate "hot spots" in a fire.

They can also zoom in on a license plate a mile (1.6 kilometres) away and greatly reduce the time it takes to locate a suspect or missing person. Durscher explaining how the French design firm Artelia utilised DJI drones and mapping technology to help fight the devastating fire in April at the Notre Dame Cathedral, at a media briefing ahead of DJI's AirWorks conference in Los Angeles, California.

Romeo Durscher, director of public safety integration at DJI, the world's leading maker of civilian drones, said the use of the devices has increased six-fold between 2015 and 2018, helping save at least 278 lives worldwide.

"What is really, really awesome about (drones) is it doesn't matter if you're large or small, you can employ the technology regardless," said Todd McNeal, fire chief at Twain Harte, a small rural town located near California's famed Yosemite National Park, where drones have been used to help combat wildfires.

McNeal noted that a commercial drone costs about US$50 (RM209) an hour to operate as opposed to US$1,500 (RM6,284) for a helicopter which can be hampered by thick smoke and must return to base to refuel and change crew.

A drone – as opposed to a helicopter – also gives firefighters vital information on how a blaze is unfolding in real time, he added.

McNeal said drones played a key role in 2017 in helping combat a fire in Yosemite. 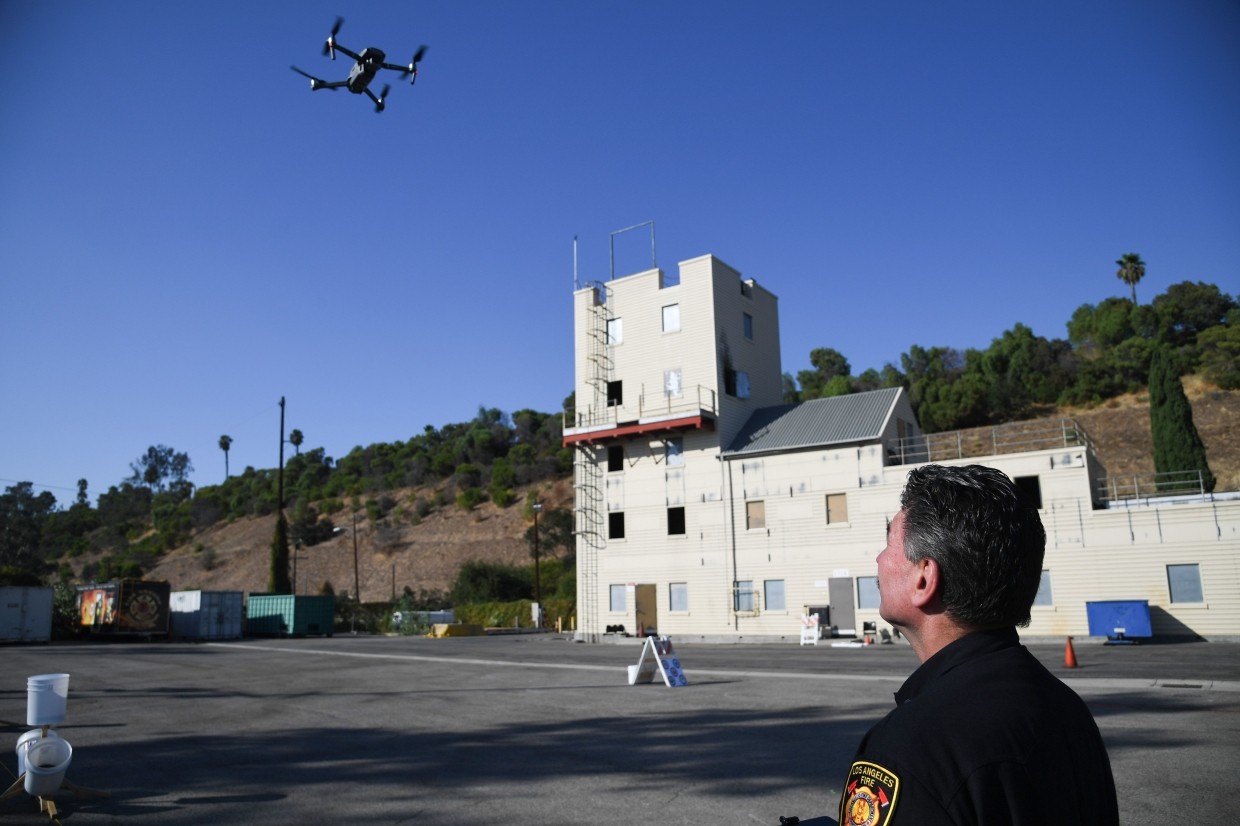 Drones are deployed during a demonstration at the Los Angeles Fire Department in Los Angeles, California.

"We were able to download, in less than an hour, truer data and give (firefighters) bearings, geographic features and lineal distances to heat signatures with causes of concern," he said.

"The whole thing came together perfectly and allowed the group to then target very specifically where the hazards and the risks were."

That's the case in Alameda County, near San Francisco, where the sheriff's department has a fleet of about 30 drones used on a daily basis. She said the US$120,000 (RM501,876) device had cords "that you're dragging through blood and crime scenes" and was linked to a computer that had to be hauled along with a generator.

"The scans were about 40 minutes apiece," she said. "In a typical crime scene we would do about eight scans. So you're out there for hours scanning."

She said a police officer operating a US$7,000 (RM29,276) drone can map out a crime scene today in 30 to 40 minutes, even in areas filled with debris, including fire-ravaged buildings. Attendees examining the Sniffer4D Air Pollution detection and mapping system from the Chinese firm Shenzhen Soarability Technology which is mounted aboard a DJI drone at DJI's AirWorks conference in Los Angeles, California.

As for using drones equipped with weapons as a tool for law enforcements, experts at the conference in Los Angeles said that was not on the books for now.

Some police departments, however, are already training officers to use drones in active shooter situations or help in a hostage situation.

That was the case last week when a drone was used in Florida during a seven-hour standoff with a man claiming to have a grenade that proved – thanks to drone footage – to be fake. – AFP