Bessrochka member Misik earned a degree of fame after a photo of her sitting cross-legged in front of a line of riot police, reading from a copy of the Russian Constitution, was widely distributed on social media. Despite the group’s small numbers, its use of new digital tools and efforts to self-organise mark a shift in civil consciousness previously unseen in Russia. — Photos: AP

MOSCOW: It's a scene many Muscovites have grown used to seeing this summer as a new wave of anti-government demonstrations gripped the Russian capital: Two masked, heavily clad riot policemen drag away a shrieking teenager as the protesters around them try to free her.

But then the two officers abruptly straighten up when she kicks and shouts.

"Well done! That was much better," one of them says, patting her shoulder. "But don't fight back or they'll hurt you."

It was a protest defense training session organised by a group of civic activists at the Sakharov Centre, a venue named for the Soviet Union's most famous dissident, Andrei Sakharov.

About 100 people had gathered for the training, including a dozen or so members of the grassroots group Bessrochka, which emerged last year. Its name can be loosely translated to "Protest Without End".

Although its membership is still small, the group's use of digital tools, its organisation efforts and education of recruits mark a shift in civil consciousness previously unseen in Russia.

The almost weekly rallies in the capital have been protesting a decision by authorities to keep a dozen independent candidates off the Sept 8 ballot for the Moscow city council. The demonstrations have been marked by an unusually harsh crackdown by police, with hundreds arrested.

The Bessrochka activists wanted to learn how to behave during the protests. Among the lessons were what to do if arrested ("Don't go too weak!"), how to act in the police van ("Don't give them your passport!"), and what to do when detained ("Learn your rights and write everything down!").

One of the activists at the training session was Bessrochka's best-known member, 17-year-old Olga Misik.

She earned a degree of fame after a photo of her sitting cross-legged in front of a line of riot police, reading from a copy of the Russian Constitution, was widely distributed on social media.

Misik and her friends spent much of their summer in detention, waiting at police stations for others to be released, or planning their next act of civil disobedience.

The leaderless, nonviolent group first emerged a year ago after a handful of activists refused to leave Pushkin Square following protests of an unpopular pension reform plan proposed under President Vladimir Putin. 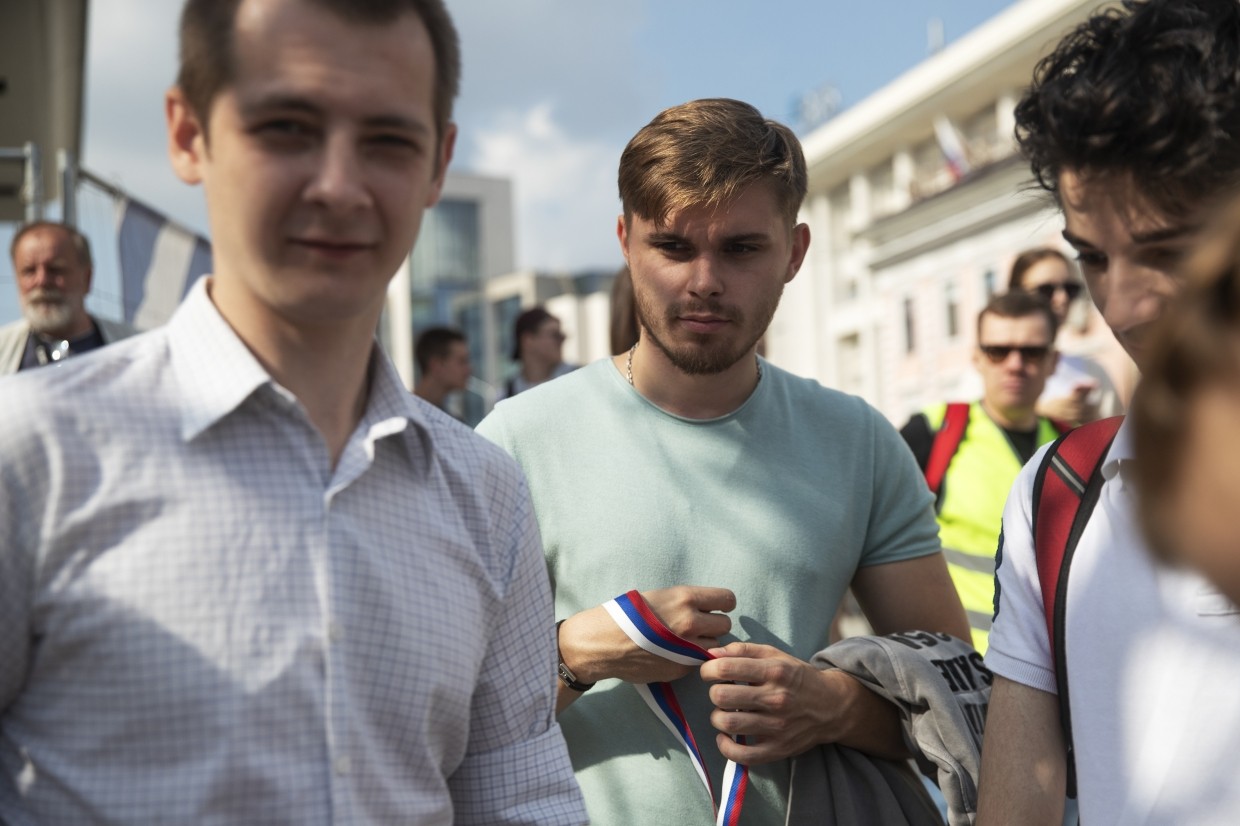 Danil Denisov (center) and Abramov (left), members of the small, grassroots group Bessrochka arriving to take part in protest march in Moscow. Bessrochka, which loosely translates to 'Protest Without End', is a leaderless, nonviolent group that first emerged after a handful of protesters refused to leave Moscow’s Pushkin Square following street protests against a proposed pension reform a year ago.

"Our members have very different political opinions," explains 31-year-old Artyom Abramov, an original member. "We are different people with a common problem: We want Vladimir Putin to resign and we want new faces in government."

The group has grown into a part-digital, part-direct action initiative with 50 to 100 active members, and several thousand subscribers on social media. Every week, activists organise pickets and low-key demonstrations on issues ranging from the environment to the release of political prisoners. Its core belief is that constant, peaceful street action is the only way to initiate change in Russia.

It has seen its membership rise, with more young people eager join its meetings and street actions.

"A new generation has appeared that sees what is happening and has much less to lose," says Emil Yunusov, 19, adding that older Russians are more constricted by family worries and work.

"Employed people are not able to protest constantly," he said.

Yunusov joined Bessrochka because he preferred the group's grassroots concept, rather than having a centralised movement headed by figures like Alexei Navalny, Russia's best-known opposition leader and anti-corruption campaigner, or Lyubov Sobol, a young activist who emerged during this summer's protests.

"People themselves should self-organise, without the orders of Navalny or Sobol. This is what develops civil society," Yunusov said. 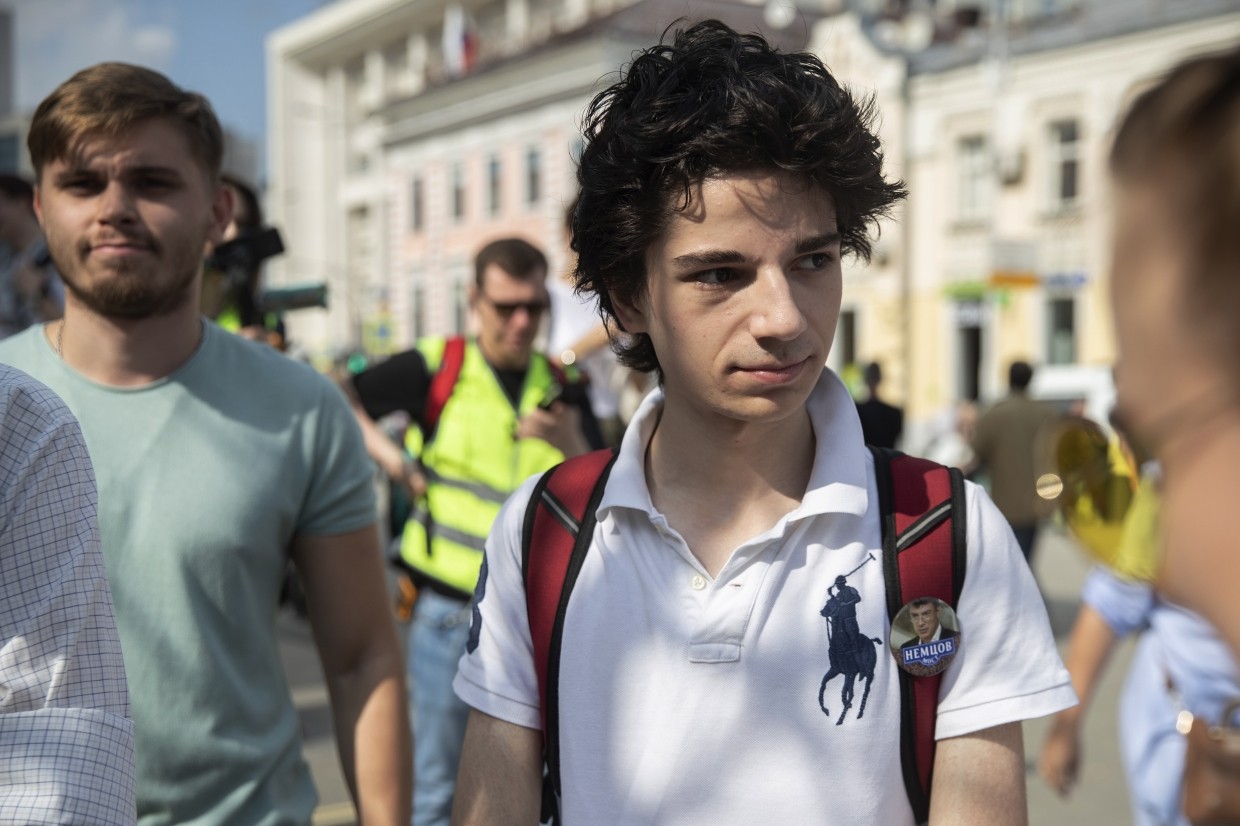 Yunusov (right) and Danil Denisov (left), members of the small, grassroots group Bessrochka taking part in protest march in Moscow. 'A new generation has appeared that sees what is happening (in Russia) and has much less to lose,' says Yunusov, adding that the older generation is more constricted by family worries and work issues.

New technology has enabled groups like Bessrochka to coordinate their actions more effectively. To join Bessrochka, its website instructs users to click a "protest navigator" on the encrypted messaging app Telegram. That directs recruits to a hub of chats and automated bots that streamline communication.

Telegram was officially banned in Russia after creators refused to hand over its encryption keys to the authorities last year, and it has become something of a resistance symbol among the country's internet users.

Afanasiy Afanasiyev, 20, who helped build the group's digital networks, says their tech tools range from bots that locate and even identify the police during protests to services providing legal assistance to detainees.

But despite the outwardly sleek online operation, Bessrochka's offline tactics are more haphazard. When its bot instructed a reporter how to meet with the group's activists in a Moscow park, the location was unclear, and they had not been told about the interview, and were unfamiliar with the bot's instructions.

While seen only as a marginal group, Bessrochka says it is under constant harassment from law enforcement and security services, revealing the Kremlin's jitters about any anti-government activity.

One of the agencies keeping tabs on the political opposition is Russia's shadowy Anti-Extremism Center. Known as "Center E", it's a unit of the Interior Ministry and was formed in 2008 to fight terrorist and extremist groups.

Prominent opposition activists say Center E has openly harassed them since the anti-government protests of 2011, regularly monitoring them and trying to stop their activities.

Center E is regarded by some as a political police force, with its operatives often seen at rallies in civilian clothes, shooting video of activists or telling riot police whom to arrest.

Bessrochka activists say they know Center E personnel by name and complain that its officers often tail the group's members from the moment they leave home.

While the opposition is harnessing its digital tools, authorities are trying to get the upper hand.

Gregory Asmolov, a fellow at King's College London's Russia Institute, wrote recently that surveillance is "one of the most promising (technological) innovation areas" for the government. At two major protests this summer, Internet connection was blocked in central Moscow for several hours. Authorities also use facial recognition software to identify activists. They are known to monitor the opposition's public chats and Telegram channels, as well as physically infiltrating activist networks.

Members of Bessrochka say they are taking precautions. Abramov steers clear of authorised rallies where he says there is a higher risk of arrest by Center E officers. More broadly, activists avoid any direct confrontation with the police at rallies and they try to maintain anonymity on the Internet.

Unlike at the largely amorphous anti-government demonstrations in 2011-12, the current protests and groups like Bessrochka are more concerned with legal procedures, defence tactics and self-organisation.

"The central idea (of Bessrochka) is to train people up to create a more coherent civil society, (citizens) who can achieve their demands," Abramov says. "Constant protest is the only way we can do that." – AP