BlueToad, which publishes digital versions of physical publications for its clients, was recently selected as one of the first companies to use Amazon’s Polly service.

“The trends increasingly show that consumers are gravitating toward audio content,” said Stuart Johnson, CEO and owner of Success magazine in a release.

A demo on Success’ website offers readers a chance to listen to audio versions of stories about health, technology and leadership read by a man or woman’s voice, depending on the author’s name.

BlueToad tries to determine gender of an article’s author using census data to match that name with a likely gender.

The company has offered publishers the ability to produce audio versions of their content since 2014 but only recently started using Polly. – The Orlando Sentinel/Tribune News Service 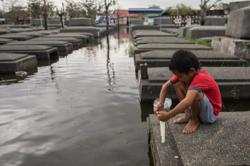 Death toll from Typhoon Molave in Philippines rises to nine