Sales increased in flagship product among local consumers and recognition by Prime Minister.

Prime Minister Tun Dr Mahathir Mohamad announced the continued use of Huawei technology as much as possible during the 25th International Conference on The Future of Asia, held in Tokyo.

“So we try to make use of their technology as much as possible,” he told a media conference.

“We have to accept that the US cannot forever be the supreme nation in the world that can have the best technology.”

Malaysian consumers have also remained largely confident with Huawei products despite the US trade ban.

In fact, after the ban announcement, many Malaysian netizens showed their support for Huawei via social media with recent shots of the brand’s smartphones purchases.

Restaurant owners also jumped on the bandwagon, by offering promotions and special discounts to Huawei users who dine in.

The Huawei P30 series flagship model has garnered increasing popularity among the Malaysian market through its sales, as can be seen in various social media posts from local supporters. 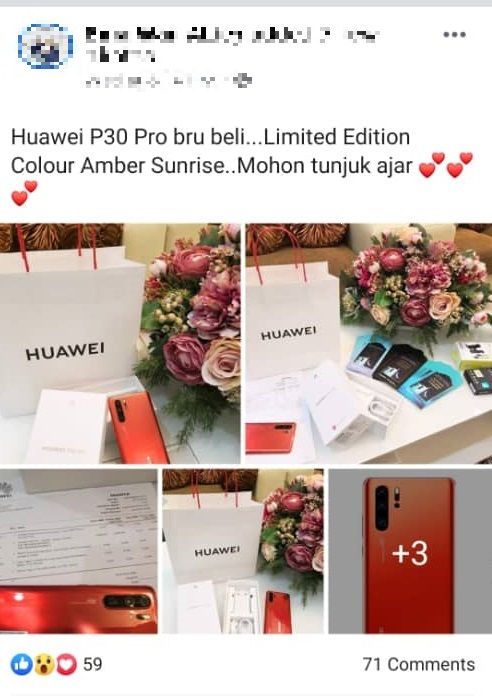 One of the netizens showing a recent Huawei purchase as proof of support.

Huawei has become immensely popular in the global news with its leading 5G technology innovations.

To date, Huawei has signed up to 40 business contracts with a number of operators across the world in relation to the 5G development. The leading standard in tech industry

At the recent MCW Conference 2019, Huawei introduced its first foldable 5G smartphone, the Huawei Mate X, and innovative products, such as its Matebook series.

These products showcase the new improvements and special features that are authentic innovations designed and created by Huawei.

They include a recessed camera on the Huawei MateBook X Pro and the “One Hop To Share” on the laptop series. What inspires confidence among Huawei users

In terms of aesthetics, the flagship model has an outstanding design and a series of attractive colours, such as a bright Amber Sunrise and the new Breathing Crystal.

At first glance, the benefits and advantages are more than attractive to local consumers. Click on this link to know more about the P30 series. The suspended Google cooperation for Huawei products has no effect on the existing smartphone models that are currently in the market.

Also, Huawei has shown to be ready and prepared against the current tension as it aims to release its own operating system by fall this year.

Google has recently again issued a statement in regards to Huawei Mate 20 Pro’s return onto the Android Q test list.

Companies or brands that care for their customers will not stop at only coming out with good products but will also provide top after-sales services.

As tensions arose from the US trade ban, Huawei remains unaffected and continues to launch activities and campaigns that bring benefits to local consumers.

To date, the Huawei team has brought its Huawei Service Day to consumers through 11 selected authorised service centres.

So, despite the US trade ban, Huawei has indeed shown resilience to weather the storm, as well as having the open support from Dr Mahathir and consumers in Malaysia and even overseas.

However, Huawei’s core belief does not live only on the value its technology can deliver — it also understands customers needs and to provide them with excellence and satisfaction.