The battle to win over millions of first-time and undecided Thai voters is now increasingly being fought online as the military-run government bans campaigning ahead of a general election expected next year.

New and established parties and even junta leader Prayuth Chan-Ocha are vying for attention on platforms ranging from Facebook, Twitter and YouTube to the Line messaging service. The contest is set to intensify as the military government that seized power in 2014 prepares to finally hold an election on Feb 24.

While the junta in September eased its ban on political activity, allowing parties to raise money and elect leaders, electoral campaigning and political gatherings of more than five people continued to be prohibited. As political parties wait for it to be fully scrapped, they are going online.

“There’s an opening for everybody, because there’s a group of seven million first-time voters,” former Prime Minister Abhisit Vejjajiva, leader of the Democrat Party, said in an interview in Bangkok. “They’re largely undecided. We’re specifically addressing this group. We’re using social media – but not breaking the junta order of not campaigning online.”

Aside from first-time voters are the millions more who have yet to make up their minds. Over half of 9,000 people surveyed across Thailand last month by tycoon-turned-politician Thanathorn Juangroongruangkit’s Future Forward party said they were undecided. That’s consistent with the party’s last three polls, he said.

Thais have become heavy users of social media, injecting a new dynamic into a country with a volatile history of elections followed by unrest and coups. Bangkok has the world’s largest active urban Facebook user base at 22 million, research by We Are Social and Hootsuite shows, and Thailand overall ranks eighth with 51 million – equivalent to about three-quarters of the population.

“Social media will demonstrate its fullest potential in the next three months,” Thanathorn said in an interview in Bangkok last week. “Because of the arrival of social media, the past election statistics aren’t valid anymore.”

A recent, spur-of-the moment Facebook Live event by Future Forward in Bangkok rapidly garnered 50,000 viewers, some of whom headed to the event to watch in person, Thanathorn said.

And a rap song criticising the military administration provides a glimpse of the online battle, garnering more than 41 million YouTube views in about a month, as well as the ire of a junta unaccustomed to sharp attacks. Officials initially considered legal action under Thailand’s Computer Crimes Act to quash the video, before opting to release a rival song that’s since received 4.6 million views.

“There’s a real shift in sentiment, and voters under 25 do not want military control,” said Duncan McCargo, professor at the University of Leeds and an expert on Thai politics. “This group of people has the most stake in the future and is the group that participates most in political discussions on social media.”

But parties say mobilizing young people to vote may be a difficult task.

“Around the world, this is the group that has the lowest turnout,” Abhisit said in the interview last week, adding the election could go down to the wire as political narratives develop in the last days of campaigning.

Former premier Thaksin Shinawatra or his allies have won every election dating back to 2001, only to be unseated by the courts or military, including the Pheu Thai party-led administration in 2014.

The discord reflects deep fissures in Thai society between urban royalists, known as the so-called yellow shirts, and Thaksin and his rural support base, the red shirts.

Next year is shaping up to be a test of whether these bitter divisions will flare up again. Already, Future Forward’s Thanathorn has been charged under the Computer Crimes Act for allegedly spreading false information online, a claim from the junta that he denies.

While the military government says the act helps to prevent the spread of false and damaging information – a prospect that also worries officials in neighbouring nations – critics say it risks restricting free speech.

“The influence of social media will be clearer this time than in the previous elections,” said Punchada Sirivunnabood, associate professor at Mahidol University’s Faculty of Social Sciences and Humanities. “Seven million voters with access to the Internet could really change the political landscape.” – Bloomberg 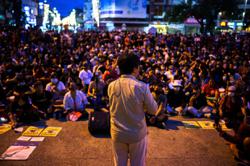 'We must fight': Thailand's youth take on the establishment 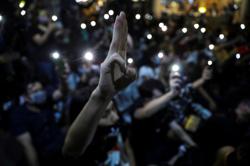