Blasts from the past: Stepping inside Japan’s retro gaming shops

Renewed interest in vintage Japanese videogames is drawing buyers to the country’s online markets and retro gaming shops. While enthusiasts have collected old titles for years, even casual gamers are now snapping up cartridges and CDs, as well as gaming machines that they haven’t played since childhood.

Although retro gaming is considered a tiny fraction of the US$109bil (RM467.71bil) global industry, it’s an attractive niche market. Last year’s re-release of Nintendo Co’s first NES/Famicom console sold out quickly, and the same is happening for this year’s follow-up, the classic version of the Super Nintendo Entertainment System.

Controllers for the Nintendo Entertainment System (NES)/Famicom console are displayed for sale at Super Potato. — Bloomberg

Given Nintendo’s dominance of the home videogame market in the 80s, it’s no surprise then that much of the buying and selling is happening in Japan.

“Retro games take me back to my childhood,” said Davide Convertino from Italy, on his fourth trip to Japan to pick up older titles. “Retro gaming is an art. It’s simple but stimulating, you never get bored of it.”

Convertino was shopping at Super Potato, a store in Akihabara, Tokyo’s electronics district. Games and machines from decades past are packed into three floors.

The Kinnikuman Muscle Tag Match gold version videogame cartridge for the NES/Famicom console could fetch up to RM78,000. — Bloomberg

There are Neo Geo and Sega Genesis consoles, and multicoloured GameBoys and Nintendo 64 controllers hanging neatly along racks. In one glass display case is the holy grail of Famicom titles: the Kinnikuman Muscle Tag Match gold version, estimated to be worth 2,000,000 yen (RM78,000).

“Akihabara has always been a gaijin hotspot, but the number of tourists in the last four, five years have been especially high,” said Yuhei Kitabayashi, Super Potato’s manager. “Now, we’re making half our revenue from tourists.”

French tourists shopping for videogame titles for the SNES console at the Super Potato store. Although Akihabara has always been a gaijin hotspot, the number of foreign tourists in the last few years have been especially high, according to Super Potato’s manager. — Bloomberg

Online sales are also booming, because not everyone can make the pilgrimage to Akihabara. Drew Steimel, who runs DKOldies, a Pennsylvania-based retro game trader, says that he sold almost US$3mil (RM12.87mil) worth of vintage games online last year, compared with just a few hundred dollars on eBay when he first started out. “We have been selling retro games for over 13 years and have seen the market grow every year,” he said.

The online market remains heavily reliant on retro videogames from Japan and neighbouring countries, with more than half of titles on eBay coming from Asia, based on a search online. Often, games sold via online marketplaces fetch higher prices: a copy of Mario Party 2 offered at 490 yen (RM19) at Super Potato was listed at 3,000 yen (RM117) to 10,000 yen (RM390) on Yahoo! Auctions and eBay.

Videogame cartridges for the NES/Famicom console for sale at Super Potato. — Bloomberg

“When we first started, our biggest customer was the 30-year-old looking to buy back their past,” Steimel said. “There are now new competitors like Nintendo itself releasing the NES Classic and SNES classic systems, but this is only making the market bigger than before. We have seen growth in all of our target age groups, especially the 20-year-olds.”

Even Sega Sammy Holdings Inc, once a major rival to Nintendo before Sony Corp and Microsoft Corp even considered making consoles, is seeking to capitalise on the retro boom. It released this week Sonic Mania, a revival game made in collaboration with the game’s most enthusiastic fans, including programmers and artists.

For some shoppers, however, nothing beats browsing the aisles of a store like Super Potato, where tourists wearing anime T-shirts make their way through the maze of shelves.

A Thai tourist shopping for videogames for the SNES console in Super Potato. — Bloomberg

On the fifth floor, there’s even a retro arcade where people can play vintage games. Salarymen with rolled-up shirtsleeves are hunched over big screens, amid the cacophony of 8-bit soundtracks. Cigarette smoke is thick in the air, as they sip on glass Coca Cola bottles.

For factory worker Shigeki Nakamura, visiting retro stores and browsing shelves of dusty games is stress relief. He was searching through the store for first-generation PlayStation titles, especially ones he may have once owned and played. “I feel like a kid again,” he said. — Bloomberg 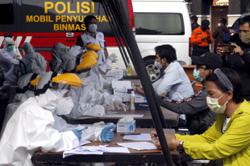