The Paddle For Nature project, a collaboration between Google and the Malaysian Nature Society to document 2000km of Peninsular Malaysian coastline ended on March 13, with 20-year-old Che Zahiruddin Che Othman stepping out from his kayak, equipped with a custom-made Google Trekker.Pix: credit to Natalie Heng

A marine conservation manager and Google team up to capture Peninsular Malaysia’s coastline.

IT is 10.30am on March 13, and the sun is beating down on Dataran Lang, a star-shaped jetty that juts out of Langkawi’s Kuah harbour. A small group of people start cheering as 20-year-old Che Zahiruddin Che Othman (aka Ajai) emerges on the water in his kayak – a moment that will be forever immortalised on Google Street View.

Above Ajai’s head, the Google Trekker – a blue orb containing 15 high quality lens cameras pointing outwards, which snaps pictures at a rate of 2.5 frames a second – is visible.

Ajai steps out of his kayak and everyone celebrates the culmination of “Paddle For Nature”, an eight-month project which claims to be the world’s first attempt to ­visually map an entire coastline. 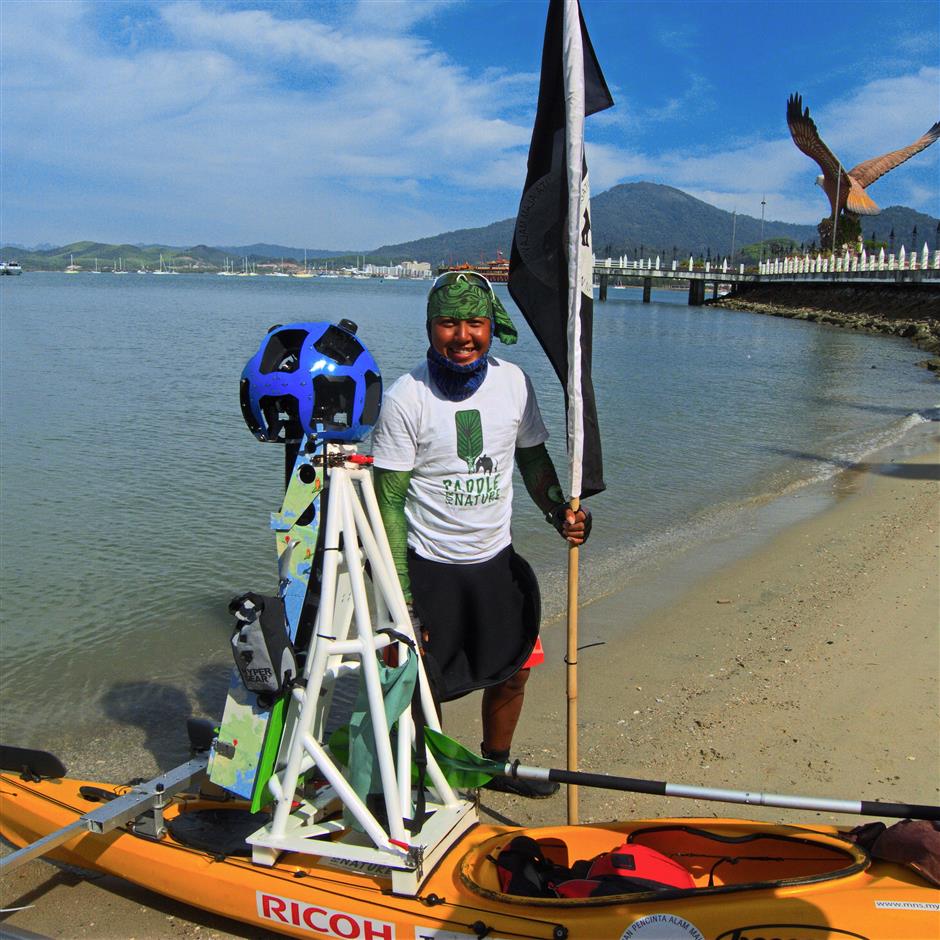 SUCCESS: The Paddle For Nature project, a collaboration between Google and the Malaysian Nature Society to document 2,000km of Peninsular Malaysian coastline ended on March 13, with 20-year-old Che Zahiruddin Che Othman stepping out from his kayak, equipped with a custom-made Google Trekker. – Natalie Heng

It all started as the brainchild of marine conservation manager Faedzul Rahman last year.

He’d heard about a friend’s plans to kayak around Peninsular Malaysia, on an adventure to sample local cuisine and meet new people.

“Being a conservationist, I suggested that he take pictures of the coastline too,” says Faedzul.

As huge areas of the coast are inaccessible by road, a kayak seemed the perfect vehicle from which Faedzul could gather baseline data to monitor the state of the coast and impact of coastline activities.

The friend in question – Hari Raju, a scuba instructor on Tioman island – was game. And as the men further brainstormed, the idea of uploading a virtual coastline onto Google popped up.

Street View had arrived in Malaysia a year before, and Google Street cars were already on the roads and in the news, due to shortly go live with 360° panoramic views of streets across the peninsula.

Faedzul was also aware of the Google Trekker loan programme – an offshoot of Street View designed to capture images off the grid. With Trekker, any third party can borrow a backpack version of Street View cameras. This is how slopes on Mount Everest in Nepal, trails through the Grand Canyon and even underwater scenes from Australia’s Great Barrier Reef have ended up as ­seamless virtual tours on Google Maps.

So, Faedzul thought, why not use Trekker to ­document the Malaysian coastline?

Faedzul approached Google Malaysia head of ­communications and public affairs, Zeffri Yusof, who in turn thought it was a ­fantastic idea. Kayaking is also carbon neutral – which meant it fit nicely into Google’s overall ­carbon neutral policy. What’s more is that Zeffri was a believer, having been on Trekking adventures himself, shouldering the 18kg backpack through Taman Negara (and ­running into a wild boar or two along the way!). All systems were go.

But taking Trekker out on a kayak ride would come with challenges, of course.

“We had to figure out whether the ride would be stable enough to collect good ­images,” says Zeffri.

Not a big problem for Google, where figuring things out is almost tradition. After all, Street View first started off as an experiment on Google CEO Larry Page’s SUV.

With Street View, 15 cameras capture panoramic 360° images which are geo-tagged via GPS, and lasers measure the distance and depth of field between objects. DETAILED: Street View cars have been traversing our roads since last year to capture 360° panoramic views of streets in the peninsula.

To get Trekker on a kayak, Zeffri reached out to Google engineers elsewhere in the region, who put together a custom-made steel harness and balancers that would keep the kayak steady in choppy sea water.

After a month-long break, the torch was then passed to Ajai, who paddled 1,000km from Desaru in Johor Baru to Dataran Lang in Langkawi, taking breaks every now and then thanks to a small army of nine Malaysian Nature Society (MNS) volunteers who would relieve him from ­kayaking duties at various intervals along the way. Cumulatively, the team of 11 paddled 2,000km, covering about 90% of Peninsular Malaysia’s coastline, including that of Penang and Langkawi islands.

It will be at least a couple of months before all the ­collected data is processed and uploaded. However, when that is ready, anyone anywhere will be able to “relive” highlights of this epic journey – zooming in on images of turtles in Port Dickson, Negri Sembilan; dolphins swimming in Segari, Perak; and a particularly hairy moment with a crocodile near a river mouth in Malacca. 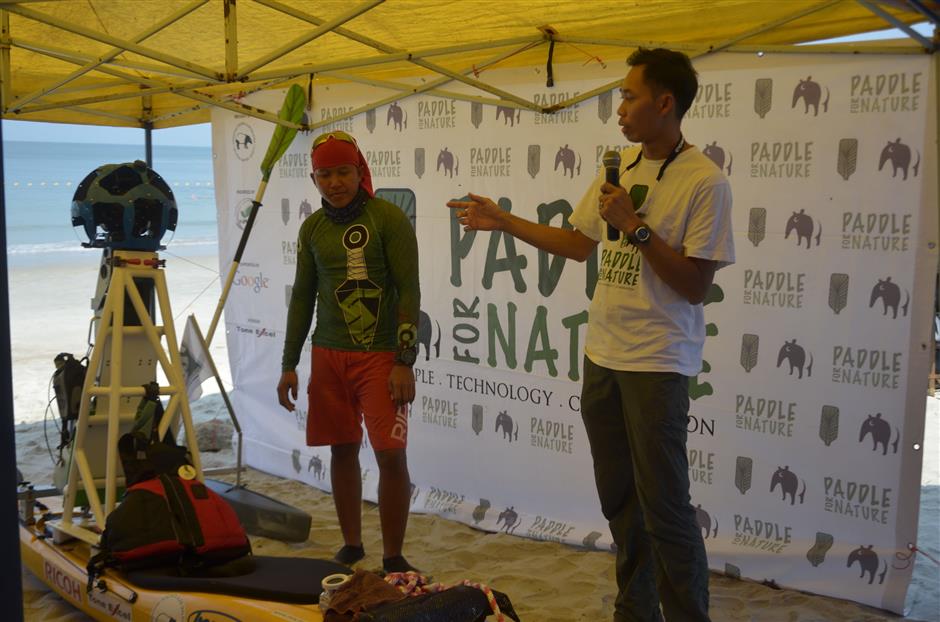 BACK ON LAND: 20-year-old Che Zahiruddin Che Othman (left) kayaked about 1,000km of the journey, with MNS marine conservation manager Faedzul Rahman (right) acting as ground crew for much of the way. – Natalie Heng

Faedzul spent most days tailing Ajai as ground crew, tracking him along coastal roads. They stayed in touch via walkie-­talkie, which would crackle out of range if they were too far apart, in which case they would send each other location pins or instant messages on their mobile phones. Often they would stay with MNS volunteers – luckily, the society has an entire ­network spread throughout the country!

While there are no immediate or long-term plans to re-image the coastline, Faedzul says another Trekker trip is definitely on the cards when updates are needed on ­certain coastal sections. “We have a time-lapse function that ­enables one to move along a slider, and see images collected before and after the occurrence of a disaster, for example,” says Zeffri.

The goal for Faedzul, with Paddle For Nature, was to be able to write a report that paints a clearer picture of the state of, and activities along, our coastline.

“A lot of people talk about our coastlines being eroded, but not many people have any idea of the extent to which this is happening. Plus, aside from the occasional media report, data that scientists like us gather is not always readily shared with or translated in a manner that is tangible to the public,” says Faedzul.

In this sense, working with Google has its advantages. Any matters raised in such a report would be verifiable in a tangible sense, as ­people would now literally be able to zoom in and analyse situations for themselves. The goal is to spark conversations, and to have a more holistic approach to development planning.

Uber urges Hong Kong government to rethink clampdown, claiming livelihoods of 14,000 drivers at risk
Opinion: Threat of the digital giants and their unfettered trade monopolies
Google’s Messages app rolls out global support for successor to SMS
Contact lenses worthy of James Bond to zoom and film in a blink of an eye
Will remote working be the new norm in tomorrow’s world?
Facebook’s AI mistakenly bans ads for struggling businesses
HTTPS only: Firefox now blocks websites without encrypted connections
PlayStation 5 giveaways: Real deal, phishing or data scam?
For Big Tech, Biden brings a new era but no ease in scrutiny
Twitter has flagged 200 of Trump’s posts as ‘disputed’ or misleading since the US election day – does it make a difference?