Get the best on a budget

We pit five affordable smartphones against each other to find out which offers the best value for your money.

Nobody needs to be stuck using a ­feature phone anymore with the price of Android smartphones falling all the time, especially as many more Chinese ­players are entering the market to offer ­better devices at lower prices.

An affordable Android smartphone is also ideal for first-time buyers, as well as those looking to see what the Android scene has to offer without it costing an arm and a leg.

To give you an idea of what’s the best device in the budget category, we have selected five smartphones that retail for under RM750. We chose to cap it at RM750 because it’s an amount that most first-time buyers will be willing to spend and it also gives us a lot more choices to compare.

One of the interesting things to note about budget smartphones is that they tend to have dual SIM capability and all the five devices in our list are no exception. As we needed time to test the devices, we had to skip some ­models that were just released.

On paper, the Zenfone has the best ­camera, at least in terms of megapixels. It has a 13-megapixel sensor while the rest only have 8 megapixels. As it turns out, the Zenfone wasn’t the best but it came pretty close.

The Grand Prime produced the nicest images among the five. The photos were sharp with a decent amount of detail and good white balance that’s slightly warm. It only suffered from one minor problem – lens flare – which occurs when there are bright objects such as lamps in the picture.

The front-facing camera was also good and better than the rest but the white balance was a little off.

The next best is the Zenfone 6, as it ­managed to nail the white balance even in tricky lighting situations, especially for indoors. The amount of detail was good as well.

However, it exhibited lens flare and ­ghosting when there was a strong light source and is also the only one which ­suffers from a slight shutter lag of about half a ­second for almost every shot. 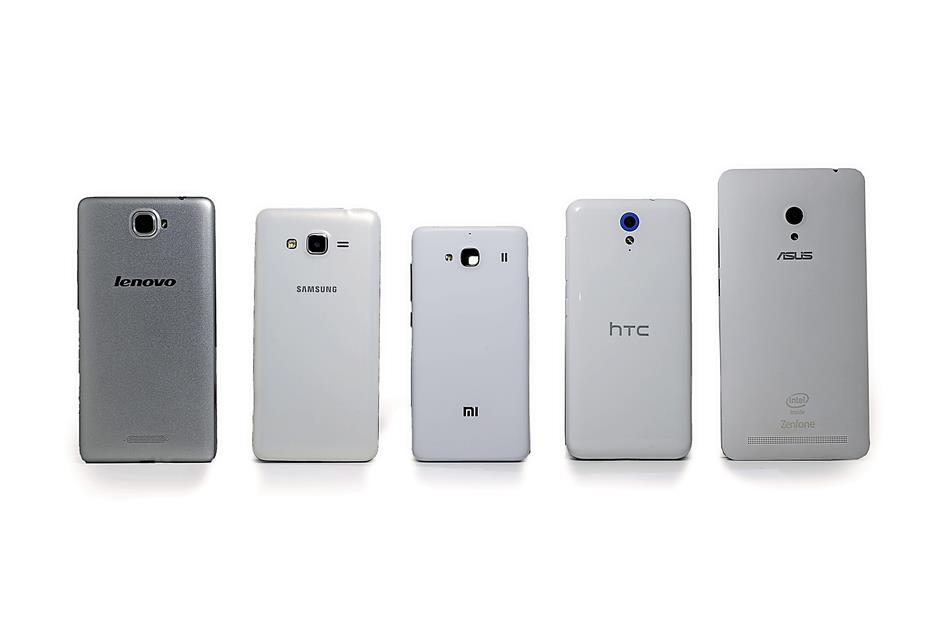 NOT EQUALS: All the smartphones have an 8-megapixel camera except the Asus Zenfone 6 which has a 13-megapixel sensor.

Indoor shots with the front-facing camera exhibited very strong noise reduction but ­outdoor shots were not too bad.

The Desire suffers from purple fringing but this seems to be the case for almost every phone that HTC makes, even the higher-end ones. The good news is that the newer ­models, including this one, exhibit minimal purple fringing.

Otherwise the camera is decent and ­produced reasonably good outdoor shots but where it shone is in macro photography, as it produced better close-up shots than the other cameras. Also, the white balance for the Desire is more bluish.

The front-facing camera is good for ­outdoors but indoor shots had a slight ­greenish cast.

The S856 camera wasn’t too impressive as strong noise reduction smoothed out detail in both indoor and outdoor shots. The same is true for the front camera for noise reduction and there was a slight yellowish cast.

The good news is that it has the most pleasing white balance that is almost ­neutral.

The Redmi didn’t perform well but it could have been a problem with the unit we got. The photos were not fully in focus which could be due to the lens having gone out of alignment. It didn’t have this problem for macro shots.

The front facing camera, meanwhile, is okay for outdoors, but indoor shots suffered from magenta and yellow casts.

Smartphones have grown in size over the years and 5in to 6in displays are no longer a rarity. A large screen is ideal for reading, ­surfing the Web and watching movies on the go while a device with a smaller screen is ­easier to handle and will usually have a longer battery life.

The devices we tested have screen sizes ranging from 4.7in to 6in and as size is mostly a personal preference we leave it to you to decide what suits you.

There are also other factors to consider such as brightness, resolution and pixel ­density but as these are budget phones none of them have a 1080p (1,920 x 1,800 pixels) screen. 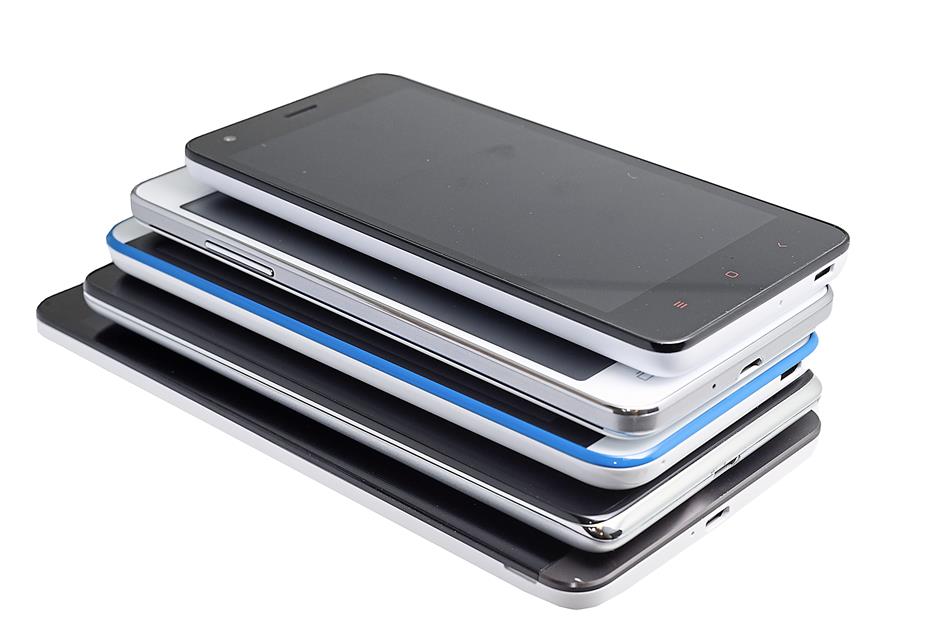 The Zenfone is the largest device in the lot with a 6in display but the 720p resolution is not great for a screen of this size — the pixel density is just too low which makes everything look a little soft.

If you want something big you are better off going for the S856 which has a slightly smaller screen (5.5in) which looks gorgeous. Hands down, it has the nicest screen of the five.

The next best screen belongs to the Desire which is 5in in size.

The Grand, which also has a 5in screen, is let down by low resolution — it’s not bad but it’s hard to ignore that it’s only a 540p screen. Still, it has punchy colours which will appeal to some users.

The Redmi has the smallest screen but with the highest pixel density. It’s the ­sharpest of the lot but the screen is dim even at ­maximum brightness.

To gauge the performance of the devices fairly we resorted to the PCMark For Android benchmarking app. We chose it as it uses other apps to ­simulate ­actual usage instead of using abstract ­algorithms to measure both performance and battery life.

We also tested the devices with two games – The Wolf Among Us and Temple Run 2 – to see how they handled graphics.

All five devices had issues running The Wolf Among Us which is understandable as it’s heavy on graphics and is made for high-end devices. The loading time was long and the game lagged quite a bit.

Again, the Zenfone came out tops as it had the least issues running the game and the Grand came a close second. However, even though the S856 scored lower than Redmi, it performed better in The Wolf Among Us.

We couldn’t gauge the performance of the Desire as it had problems rendering the game.

The Zenfone, Grand and S856 also had the least problems with Temple Run 2, suffering only occasional lags. The Redmi and Desire could also handle the game but stuttered more.

Battery life of a smartphone is dependent on many factors such as screen brightness, processor speed and battery capacity.

We used PCMark For Android and also ­tested each smartphone individually by using it for social media, shooting photos and ­playing games to gauge each device’s stamina.

The Grand Prime, which has a 2,600mAh capacity, clocked the best time on PC Mark as it survived for six hours and 43 minutes. In our own usage test, it lasted six to eight hours.

All the other phones lasted about six hours in our usage test but they scored differently in PCMark.

The S856 came a close second with its score of six hours and 30 minutes, while the Zenfone 6, which has the largest battery at 3,300mAh, went a little above six hours in the benchmark test.

The Desire scored the lowest as its battery only lasted five hours and 48 minutes on PCMark.

Redmi 2 is the only one that wasn’t able to complete the PCMark benchmark – this could be due to compatibility issues.

Just about every Android manufacturer makes a unique user interface (UI) for its devices. The UI is not only meant to offer a snazzy look but also make the device easier to use.

All the smartphones run on Android 4.4.x KitKat and not the latest Android 5.0 Lollipop but this is expected as even a lot of high-end smartphones have not been ­updated to Lollipop.

Of the five devices, Redmi 2’s UI has the most modern look as it’s flat and ­minimalistic just like Lollipop. Even the pre-installed apps have adopted this design and they look good.

The Grand runs on Touchwiz UI but it’s not as feature-packed as the version found on the company’s high-end devices. However, it has the same look and feel and is easy to use.

The Desire UI has undergone minimal changes and gives you almost the stock Android experience. The UI is not cluttered and is very simple to use.

On the other end of the spectrum are the S856 and Zenfone, as the companies have made the most changes to the UIs. For instance, Lenovo has removed the app ­drawer, a main feature of the Android ­platform, and the settings menu is a little confusing.

The Zenfone retains the App Drawer but is filled with bloatware which uses up precious space. Nonetheless, the UI is very colourful and attractive.

Redmi 2 is definitely the clear winner in this category as it has the nicest and most functional UI.

Bang for the buck

If we had to pick one winner, it has to be the Samsung Galaxy Grand Prime, as it has the best camera and longest battery life among the five. It also performed well in all other categories and is only let down by a 540p screen. If you are not going to be ­counting pixels, you will get the most value for your money with the Grand.

Second place goes to the Asus Zenfone 6 and it’s a good choice if you want a large device with a 6in screen. It was the ­speediest Android and was well above par in most other categories.

HTC Desire 620G and Lenovo S856 tie for the third spot. The Desire has a simple UI and better camera but its performance wasn’t too great when playing games. The Lenovo, on the other hand, has a nice screen and decent ­battery life.

The Xiaomi Redmi 2 didn’t fare too well but it’s the cheapest device in the category and also has the nicest UI.