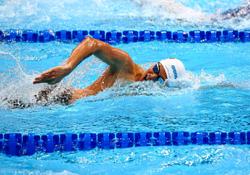 With time is running out, Malaysia Swimming (MS) will apply for one male and one female swimmer to go to the Olympics under the universality places allocation.

The Olympics qualifying campaign for will end by June 27 and only swimmers who have made the Olympic Qualifying Time (OQT) will get the automatic cut to Tokyo.

One can also qualify under the Olympic Selection Time (OST) list but this will only be considered after the full quota of 878 athletes for swimming are taken up.

Freestyle specialist Welson Sim and woman breaststroker Phee Jinq En are expected to get the nod as the only Malaysian swimmers who have made the OST list for their respective pet events based on their performances at the 2019 SEA Games in Philippines, which was the last major competition for the national team.

Welson made the mark in the men's 200m and 400m freestyle while Jinq En reached the standard in the women's 100m breaststroke.

But MS secretary Mae Chen said there was no guarantee that both would be able to get on board to Tokyo if they continue to wait for FINA, so they decided to submit under universality places quota.

"It is a tricky qualifying process. FINA will first take in all those who made the OQT list and then the relay teams," she said.

"Then they will award the universality places and only then consider those under OST if the quota slots for swimming are not taken up."

At the last Olympics in Rio, Malaysia were represented by Welson Sim and Phee Jinq En.
Meanwhile, the national swimmers will get to warm-up and test where they stand after a long season without competition at the Malaysian Open this weekend.
Article type: metered
User Type: anonymous web
User Status:
Campaign ID: 46
Cxense type: free
User access status: 3
Join our Telegram channel to get our Evening Alerts and breaking news highlights