The 23-year-old, runner-up at last year's Olympics, is also the first South American to win the event.

Andrade scored 56.899 to claim the gold medal, beating American Shilese Jones (55.399) who won the silver and Britain's Jessica Gadirova who took bronze with 55.199.

"Everything always happens when it needs to, and I am really happy to have done everything I could," Andrade said.

"I feel really incredible and satisfied with the competition." 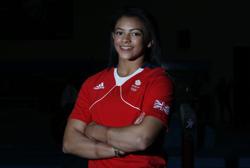