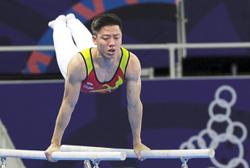 PETALING JAYA: The day has finally come and and national artistic gymnast Jeremiah Loo (pic) is ready to seize the moment.

Though a medal or a final place in any of the events may seem a distant possibility, the Penangite does not want to give up without a fight.

He will compete in the men’s individual all-around qualification at the Ariake Gymnastics Centre today.

He will be in the same division with gymnasts from China, Ukraine, Russia and Spain.

Jeremiah is steadfast in his aim to break his personal best of 76.5 in the individual all-around, which he did in the 2018 Jakarta Asian Games.

But after the podium training on Wednesday, he believes he can pull off a surprise.

“Gymnastics is not like a 100m sprint or tennis where you can identify the favourite. In gymnastics, sometimes even the best can fall, have a bad landing or don’t execute their routines well,” he said.

“For me, anyone has a chance of winning a medal depending on how they perform.

“The podium training felt good because, after two years, I am seeing athletes from around the world in their leotards.

“I learned from them,” said Jeremiah, whose coach is Ng Shu Liang.

“My coach is here with me. Whenever I’m feeling the pressure, he calms me down. His presence has helped a lot.

“It’s been long since I’ve been in such an environment. It’s time to show the world that I have what it takes to mix with the best in the world.”