It’s an urban Raya for Farah

EVERY year for Hari Raya, national artistic gymnast Farah Ann Abdul Hadi would set out with her parents and sister to her father Abdul Hadi Hamid’s hometown in Negeri Sembilan.

There would be stops in many houses to visit relatives and plenty of cheer.

This year, though, Hari Raya takes on an urban look for her as she celebrates with her parents and sister in Subang Jaya. And the only trip she will be making is to Bukit Jalil for the one month closed-door centralised training.

Farah obviously wants to make the best of it. She has been helping mother Kimberly Ann Gagnon and sister Katrina Ann, who is a former national synchronized swimmer, to bake delicacies like date squares, brownies and chocolate macaroons. “My father has prepared lemang and rendang, and we did the confectionaries,” said Farah.

Typically, they would bring these items to Negri Sembilan, but this year, it will be distributed to their neighbours.

“In the past, I have missed a couple of Rayas due to competitions and training overseas, but during these trying times, I am grateful that I can spend quality time with my family during the festival. I want to cherish every single moment with them,” said who turned 26 on May 3.

She will miss her extended family in Negri Sembilan, though.

“If we had gone to Negri Sembilan, the first stop would have been at Mak Long’s (aunt’s) house, where we would have had “lontong” and “sup tulang”.

“At the end of the day, we would go to our grandmother’s house and catch up with our cousins. When I was younger, I used to play Batu Seremban and fireworks with my cousins,” she said.

The year 2020 has been a tough one for all Olympcians and Farah said she was mentally affected when the Olympic Games were postponed. 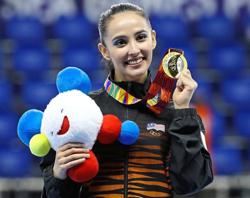 Farah has four for company in training 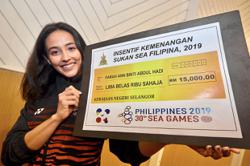 Farah’s all smiles as she gets to roll, jump and swing again