Superheroes: Bergson Da Silva and Fernando Forestieri (inset) have scored 13 and seven goals respectively for JDT so far this season.

PETALING JAYA: You can call them Batman and Robin.

Johor Darul Ta’zim’s attacking duo of Bergson Da Silva of Brazil and Fernando Forestieri of Argentina are just unstoppable in the Super League.

The strikers continue to be the saviours for JDT with their super goals and energetic presence.

The latest victims of their dominance are Petaling Jaya City, as the Southern Tigers mauled them 4-0 at the Sultan Ibrahim Stadium in Iskandar Puteri on Tuesday.

The defending champions are now top in the league with 22 points and are unbeaten in eight games.

Da Silva blasted the goals in the 23rd and 65th minutes while Forestieri was equally brilliant as he slotted two in the 26th and 85th minutes.

Da Silva has now scored a whopping 13 goals from eight matches while Forestieri, who usually plays as a winger or second striker, has scored seven in eight games.

In Da Silva’s case, PJ City seem to be the opponents he loves the most, as he has now scored six goals in four meetings against them.

Before the game, coach Benjamin Mora said PJ City were formidable opponents with high energy and ability, so they needed to be calm and collected with their play and approach.

“My boys did exactly that with great precision,” said the Mexican in the post-match press conference.

“PJ City have always been physically and tactically organised. They are always running, fighting and challenging. They do not give any space in the middle, but I told my boys just to be efficient with their possession.

“We started with great energy and controlled the game early. The first two goals were amazing and made my tasks simple. After that, we controlled our actions, rectifying some weaknesses but most importantly, we played great football.”

Besides Da Silva and Forestieri’s fine performances, Mora praised Afiq Fazail, who was instrumental in the middle of the park.

“To me, he is one of the best midfielders in Malaysia. He interprets the game well, intelligent in every part of the game, and is a team player.

“The amount of space he creates for his other teammates is underrated.

“He is one player that makes the team shine. Afiq, alone, does not want to take all the plaudits. That’s a trait of a great player. To me, he is the key!”

Meanwhile, PJ City coach P. Maniam said JDT were just a class above them throughout the game.

“They punished us when spaces were given.

“We made mistakes, conceded four goals, and should not have done it,” he said.

“We gave away many free kicks and made errors in terms of passes. At this level, it should not be done. We tried to be compact, but JDT rotated the ball well. The quality they have is just different.” 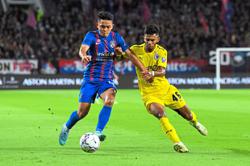