Small but deadly: Terengganu’s Faisal Halim (left) has been a standout in the Malaysia Cup with six goals and four assists after just six games. — Terengganu FC

PETALING JAYA: When Terengganu’s exciting pint-sized winger Faisal Halim is on the field, a match against the Turtles won’t be short on thrills. And that’s a pun intended for the biggest effect.

The 23-year-old Faisal, who stands only 1.58m (5’1”), has been a standout in the Malaysia Cup with six goals and four assists after just six games.

His electrifying pace and mazy dribbles, aided by his fine understanding with attacking teammates Jordan Mintah and Faiz Nasir, have been instrumental in helping Terengganu reach the semi-finals.

The east coast outfit are now hoping Fasial can work his magic in the semi-final against defending champions Johor Darul Ta’zim (JDT). The first leg will be at the Sultan Mizan Stadium in Gong Badak tomorrow.

Faisal has reminded his teammates that the clash against the Southern Tigers would be like a final.

“Even if we win in Gong Badak, it will still be a game that can go either way at Iskandar Puteri. JDT will enter the game as favourites, no doubt. They have the quality to punish us if we slip up.

“At the same time, we must not show them too much respect.”

As for his scintillating form, a modest Faisal claims that even he is surprised by it.

“I’m actually shocked by my own form. This year has been special for me. In the Super League, I scored four goals and provided three assists in 22 games, which is decent.

“But what’s more important is the number of starts I got,” said Faisal, who has been selected for the AFF Suzuki Cup squad.

“In the Malaysia Cup, I must attribute my good form to my teammates and coaches. I couldn’t have done this on my own.” 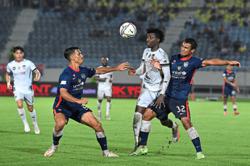