Habib: Turtles pumped up to end league on a high PETALING JAYA: Terengganu are fired up to snap out of their three successive defeats to finish strong in the Super League.

Midfielder Habib Haroon said they will channel all their anger and frustration to destroy Penang in the league’s final match at the City Stadium in Georgetown today.

The east coast side have failed to pick up points against Kedah (1-2), Kuala Lumpur (0-1) and Johor Darul Ta’zim (0-1) which resulted in coach Nafuzi Zain receiving a show cause letter from the management.

The Turtles are fourth with 37 points after 21 games and a win against Penang could at least guarantee them a top three spot which they occupied last season.

Habib said they are highly motivated to end the league on a good note before beginning their Malaysia Cup assault.

“We hope Allah will help us win this game. The fans and players are angry because we know we don’t deserve to be in this predicament,” said the 21-year-old.

“We have not scored in the last two games but we will fix it against Penang,” added Habib, who joined the club in the second transfer window from Bahrain club Al-Khalidiya.

Currently three teams – Kedah, Penang and Terengganu – are fighting for the slot.

“We want to see Penang competing at an Asian-level championship,” Trucha told Bernama.

He said at the start of the season, their target was a sixth place but their current third position has been a pleasant surprise.

“I exposed them to a winning mentality from the start when I took over plus we brought in several good players to push the squad to work harder,” added Trucha. 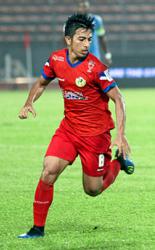