Tunku Ismail to striker Syafiq: Unhappy? The door is open 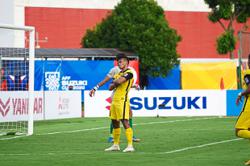 ‘It’s fun watching my friends play’ — that simple yet cryptic tweet posted by JDT striker Syafiq Ahmad has landed him in hot water with owner Tunku Ismail Sultan Ibrahim. Syafiq had hinted at the lack of minutes he had been getting but Tunku Ismail was clearly not amused.

JDT striker Syafiq had watched his teammates beat Petaling Jaya City 2-0 at the Petaling Jaya Stadium on Saturday from the bench and as soon as the match was over, he posted a tweet that said “It’s fun watching my friends play.”

Syafiq’s tweet had hinted at the lack of opportunities that he had been getting with the Southern Tigers but club owner and Johor crown prince Tunku Ismail did not mince his words in his reply.

“This is a football club. Not a social welfare club,” Tunku Ismail said on his social media.

“Whoever trains well and works hard will play, whoever doesn’t will not play. Unhappy? The door is open. This is not a prison. Simple.”

“At JDT, those who work hard in training and perform will play. Those who want a challenge in their careers and win titles come to JDT. Any which way: JDT’s Akhyar Rashid (right) tries to wriggle his way past PJ City’s Filemon Anyie Standly in their Super League match on Saturday. Mohamadou Sumareh (below) scored the second goal in JDT’s 2-0 win.

“Those who want minutes can join another club. No one is being forced. The choice is with the players.

“You (Syafiq) knew the terms and policies of the club when you signed for JDT. You played often last year and the year before but after the tragic incident, you have not been the same.”

In December last year, Syafiq suffered a devastating blow when he lost two of his loved ones in a car accident.

His 22-day old son Mohd Aisy Saqeef and mother-in-law were killed after the SUV he was driving crashed on the North-South Expressway near Nibong Tebal.

Since that incident, he had only made substitute appearances twice in the Super League and the AFC Champions League respectively.

“We gave you time, support and monitored you. If you’re not happy or don’t agree, let’s talk. Communicate, not tweet.

“Anyhow, the door is always open. You said “It’s fun watching my friends play.” Play what? Football. If you want to play football, you can do it anywhere.

“But if you want to play football and celebrate with fireworks, come to JDT.” Syafiq had since taken down the tweet and apologised for his action.

On his Instagram page, the 26-year-old posted: “I humbly apologise to my teammates, club and especially the Crown Prince of Johor who has helped me a lot on and off the field.”

“I admit that I should not have followed my emotion and should reflect on my mistakes that I’ve done all this while.”

Meanwhile, in the game against PJ City, Brazilian striker Bergson Da Silva was on fire as he scored his 20th goal of the season.

After receiving a brilliant pass from winger Arif Aiman Hanapi, he dribbled past three defenders before sending the ball into the net in the 27th minute.

JDT are just one win away from winning their eighth title. If they beat Pahang at the Sultan Ibrahim Stadium in Iskandar Puteri on Friday, they will be hailed as the champions. 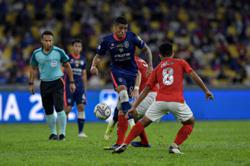