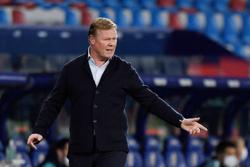 MADRID (Reuters) -Barcelona coach Ronald Koeman hit out on Wednesday at football's authorities as the fallout continued from now-abandoned plans to create a European Super League.

The Catalan side were one of 12 clubs who announced plans on Sunday to form the breakaway league, which has since collapsed after most members withdrew following intense criticism from fans and politicians.

Koeman, whose side are preparing to host Getafe in La Liga on Thursday, criticised both European football's governing body UEFA and Spain's La Liga, saying that reforms, including fewer games, are needed.

"I agree with (Manchester City coach Pep) Guardiola when it comes to the number of games players have to play in over a season. It's too many, incredible," Koeman told a news conference.

"Everyone's talking about the Super League and the Champions League, but UEFA aren't paying any attention to the players about the number of games.

"The only thing they care about is money. In La Liga, it's the same. Look at the scheduling. Tomorrow we play at 10 p.m. - we need to protect the players."

The Dutchman also said that club president Joan Laporta had spoken to him about the Super League, but would not be drawn on Barca's participation.

"There's been a lot of fallout and the best thing is not to say much now, no one knows what will happen. What I want most is what's best for this club," Koeman said.

"I'm not the club's spokesman. My job is to prep for the game. We need to see how it all pans out. We just want what's best for the club, but if anyone has to speak about this subject, it's the president."

Koeman did, however, say he agreed with defender Gerard Pique's tweet which said: "Football is for the fans. Today more than ever."

Barca, who won the Copa del Rey last weekend, sit five points behind leaders Atletico Madrid with a game in hand and know that if they win all their remaining games this season - including one against Atletico - they will win the title.

"There's always pressure to win at Barca," Koeman said. "You need to win and fight for trophies. We were a long way back at one point but now (in the run-in) we need to show we can win the title." 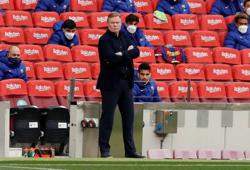