PETALING JAYA: Sarawak could have won the Malaysia Cup for the first time 25 years ago.

Former Sarawak striker Pengiran Bala believes that if not for the “moment of madness” at the State Stadium in Kuching during the return-leg of the Malaysia Cup semi-finals in 1988, it could very well have been the year of the “Ngap Sayot”.

“What happened 25 years ago should be a lesson to all,” warned Pengiran from Miri on Friday, ahead of Sarawak’s semi-final, second leg match against Pahang on Saturday. Pahang won the first-leg 3-1.

Pengiran said that the 1988 team under Sarawak football legend Awang Mahyan should have qualified for the final after holding fancied Kedah to a goalless draw in the first-leg of the semi-finals in Alor Star.

But, barely 10 minutes into play in the return-leg in Kuching, the match was called off due to crowd invasion. The game was later played at a neutral venue in Singapore and Kedah won 1-0.

“People are still talking about the Ngap Sayot team of 1988. We qualified for the knockout stage for the first time in the history of Sarawak football. We beat Johor 4-2 on aggregate in the quarter-finals.

“I remember we lost the first-leg in Larkin 2-0, the headline was ‘The party is over’. But we proved them wrong and surprised everyone by thrashing Johor 4-0 in Kuching. We led 3-0 by half-time,” he recalled.

It was Pengiran who opened the scoring before Jalil Rambly, Mohd Ali Sapiee and Burhaniza Abu Bakar put their names on the scoresheet.

In 1999, Jalil coached Sarawak and they went on to reach the Malaysia Cup final, losing 2-1 to Brunei in extra-time.

Now, the East Malaysians believe they have a fighting chance to make the final again despite the first-leg setback in Kuantan last week.

It looks like 1988 revisited as far as Pengiran is concerned.

But he hopes that “the fans will keep their cool and let the boys give it a go”.

“It’s not impossible to overturn a two-goal deficit. It can be done with determination and self-confidence. The fans are behind the team. What is important ... the boys should go for early goals,” said Pengiran.

Sarawak coach Robert Alberts has done a remarkable job in getting the locals to combine with the foreign signings – Bosnian striker Muamer Salibasic and Cameroon centreback Guy Bwele.

The Premier League champions have been impressive at home with 11 wins, a draw and a defeat all season.

In the Malaysia Cup, Sarawak have won all four home matches, including thrashing Super League side Perak 6-1 in the group competition and defeating Sime Darby FC 3-1 on aggregate in the quarter-finals. 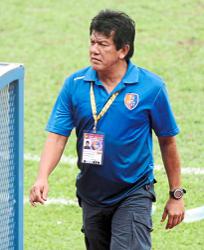 Sarawak Utd hoping to pull through despite tough situation