A plunge not worth taking 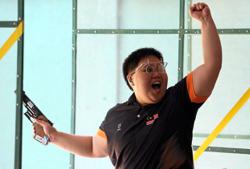 Back to 10m again

But sorry folks – it is not going to happen.

Jun Hoong prefers to make her comeback to competition next year and is currently focusing on getting back to top physical shape.

Malaysia Swimming (MS) are planning to host a live streamed diving competition at Bukit Jalil on Nov 14-15 pitting the national divers against their counterparts from Australia, New Zealand and Singapore.

However, Jun Hoong’s coach Yang Zhuliang said he is not aware of the plans for an online diving competition at Bukit Jalil.

“Honestly, I am not very clear about the details of the online competition. I am training Jun Hoong separately from the other national divers.

“I am only responsible for Jun Hoong and it’s okay if she does not want to dive in any competition this year.

“She has improved a lot since we started training back in June and is now more stable.

“But if she is going for a competition in less than a month, then the intensity of training may change and I am not sure if it’s good for her.

“Our plan is still to get ready for the World Cup in Tokyo next year as it’s the Olympic qualifying event.

“We may try to go for the German Open in Rostock as it’s at the end of January and a month before the World Cup meet,” said the Chinese-born coach, who was instrumental in guiding Jun Hoong to the gold medal in the women’s 10m platform individual event at the World Aquatics Championships in Budapest in 2017.

Jun Hoong has not taken part in any competition since she went under the knife because of torn knee ligaments in 2018.

She had hopes of making her comeback in April to secure an Olympic spot through the World Cup meet in Tokyo and went to China to train under Zhuliang but the Covid-19 pandemic turned everything upside down.

Fortunately, Zhuliang followed Jun Hoong back to Malaysia and has been guiding her under the Road to Tokyo special training camp in Bukit Jalil since June.

Jun Hoong bagged an Olympic silver medal with Pandelela Rinong in the women’s 10m platform synchro in Rio de Janeiro four years ago but is likely to focus only on the individual event this time. 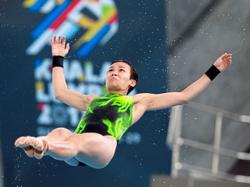 Back to 10m again