PETALING JAYA: It’s going to be a tricky challenge for the national divers when the competition schedule returns to normal next year.

The decision by International Olympic Committee and Tokyo 2020 organisers to move the Games by another year due to Covid-19 pandemic means FINA, the world governing body, will have to find new dates for its next world championships.

The biennial aquatics event was scheduled from July 16-Aug 1 in Fukuoka, Japan but it will clash with the new Tokyo Olympics dates from July 23-Aug 8.

FINA now have several possibilities - to either stage the world championships earlier before July or do it after the Olympics, in 2022.

The world championships have always been held in odd years but the Covid-19 pandemic has created a mess in the world sporting calendar.

“FINA have few options. If they host it earlier as a qualifying event for the Olympics, our divers will have to focus on the competition as well, ” said Mae Chan.

“We are also waiting on the new dates for the Diving World Cup supposed to be held in Tokyo this month but has been postponed.

“The Diving World Cup is supposed to be the Olympic test event and last qualifying meet.

“But honestly, we don’t know when this situation (Covid-19 pandemic) will end and it looks very possible that we may be without any international competitions this year.

“It’s good that the athletes have ample time to prepare but I think they have to brace for a hectic season ahead.

“The juniors too also have to focus on the domestic competitions which have been pushed back.

“Hopefully, by September, we can try to hold some of the postponed events like the Malaysian Open, the Malaysian Diving GP, MSSM championships and SportExcel but it’ll be tough, ” she said. 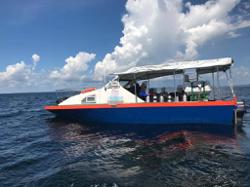