PETALING JAYA: Diver Leong Mun Yee’s dream of becoming the first Malaysian athlete to compete in five Olympics is back on track.

The postponement of the Tokyo Olympic Games is a blessing in disguise for Mun Yee.

The Tokyo Olympics were postponed yesterday to 2021, the first such delay in the Games’ 124-year modern history, as the coronavirus crisis wrecked the last international sporting showpiece still standing this year.

The pandemic has spread to almost all countries in the world and restricted daily life.

“Based on the situation we are facing right now, the host had no option but to postpone the Games,” said Mun Yee.

“Even the Diving World Cup (supposed to take place in Tokyo next month) has been postponed. I think the most important thing now is to contain the virus first so that things can go back to normal soon,” added Mun Yee, who is trying to stay in shape by doing fitness routines and yoga back at home in Ipoh.

Her last competition, the only one so far this year, was the first leg of the Diving World Series in Montreal three weeks ago where she claimed silver with Pandelela in the women’s 10m platform synchro.

The subsequent three legs of the prestigious series in Beijing, London and Kazan have been called off because of Covid-19.

Mun Yee has already made the Olympic cut for Tokyo with Pandelela by virtue of their silver splash in the same event at the World Aquatics Championships in Gwangju, South Korea, last year.

On how she is affected by the current restrictions, Mun Yee said he could only hope for the situation in the country to improve over the next few days.

“Right now, it’s still okay. But if it continues, it will surely affect our preparations and performance,” said Mun Yee, who is one of only three Malaysian athletes to compete in four Olympics so far. The other two are shuttler Lee Chong Wei and sailor Kevin Lim.

She was not picked for the Rio de Janeiro edition in 2016 as coach Yang Zhuliang opted for Pandelela to partner Cheong Jun Hoong, and the duo claimed silver in the women’s 10m platform synchro. 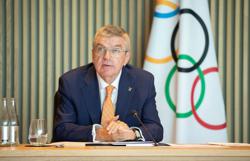