The 20-year-old stunned the judges with her impressive dives to collect a total of 313.85 points to finish first in the five-round event while compatriot Loh Zhiayi took the silver after accumulating 223.45 points.

Nur Dhabitah said she was nervous at first when standing on the springboard, but managed to overcome it since this competition was very important to bring her to another big stage.

"Alhamdulillah, I finally got the Olympic slot. I was nervous although we had a chance. Maybe it’s because of home ground and I wanted to give my best,” she told reporters at the National Aquatic Centre.

Despite winning, the Kuala Lumpur-born athlete is still not satisfied with the two dives in her performance today.

"I think I could have done better in the second and third dives. I will continue to improve because I came (straight) from the World Championship (Gwangju 2019) and did not have time for training on technique.

"So, after this competition I want to start to get back to basic," she added.

For Asian Cup, the respective individual winners of the men’s and women’s 3m springboard and 10m platform will get slots quota to qualify for Tokyo Olympics.

Besides the individual event, Nur Dhabitah said she is aiming for another Olympic slot in the women's 3m springboard synchronised with partner Wendy Ng Yan Yee.

Since the Asian Cup does not guarantee any slot for synchronised events, both of them are targeting to get one at the FINA Diving World Cup 2020 in Tokyo, just a few months before the Olympic 2020.

Tokyo will be the second Olympic appearance for Nur Dhabitah, the fourth Malaysian diver to qualify after Pandelela Rinong Pamg, Leong Mun Yee and Wendy.

Her Olympic debut was in Rio 2016 after she took the gold in women's 10m platform individual at the Asian Diving Cup in Bukit Jalil the year before. - Bernama 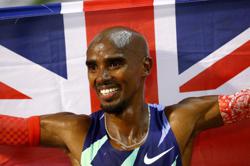 Mo Farah to race only 10,000m at Tokyo Olympics