Wendy with the Women's 3m Springboard gold medal she won at the KL SEA Games 2017. - Bernama

The ban, issued by FINA, the world governing body for aquatics, is backdated to Aug 26 last year. This means that the diver will finish serving her ban on April 26 and can feature at the Asian Games in Indonesia in August.

Amateur Swimming Union of Malaysia (Asum) secretary Mae Chen said they were informed of the decision by FINA through email.

"Aug 26 last year was the date when the B sample was taken from her.

"She can resume training with the national team after April 26. We have plans for her for the Asian Games.

"With her around, there will be more options for the 3m springboard individual and synchro.

"We are pleased with the decision," she said.

The Rio Olympic springboard finalist was confirmed as having committed a doping offence after her B sample was opened at the World Anti-Doping Agency lab in New Delhi, India on Oct 11 last year.

The 24-year-old Wendy eventually had to return the two gold medals she won in the 3m springboard individual and synchro event with Nur Dhabitah Sabri at the KL SEA Games.

At the last Asian Games in Incheon, South Korea in 2014, Wendy took silver with Cheong Jun Hoong in the 3m springboard synchro. 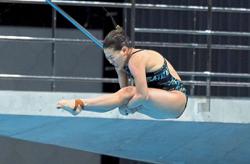