Look Ma, no hands: Floyd’s Racing rider Travis McCabe celebrating his win at the end of Stage 3 in Putrajaya yesterday.

The Floyd’s Racing team rider left the peloton trailing in their wake in the final kilometre to finish two seconds ahead of the bunch sprint from Muar to Putrajaya over a distance of 196.2km yesterday.

The added time bonuses meant the 29-year-old McCabe claimed the yellow jersey from Stage One winner, Team Sapura’s Marcus Culey, who was dealt a double blow with McCabe also replacing him atop the points classification lead.

Three riders – Malaysia’s Sofian Nabil Omar Bakri, KSPO’s Kwon Soon-yeong and Giant Cycling Team’s Shi Hang – broke away from the start and bagged all intermediate sprints and mountains classification points, while opening up a maximum gap of more than nine minutes at one point before the peloton began chasing them down at about 40km from the finish.

Sofian was the main benefactor of that trio, topping all three intermediate sprints of the day, with nine time bonus seconds launching him into the lead of the Asian riders’ classification.

But the day belonged to McCabe, with the peloton pulling back Shi Hang and a late attack by St George Continental’s Mattheew Zenovich inside the final three kilometres, the Floyd’s Racing’s lead-out train surged to the front.

“I’m very happy with this win. We knew how technical the finish was going to be, so my teammates worked very hard coming into the last corner, so we were able to jump early for a comfortable win,” said McCabe.

With the Queen Stage from Shah Alam to the summit of Genting Highlands up next, McCabe knows his time in the yellow jersey would not go beyond today’s stage but said he would be happy to support the climbers in his team.

The 28-year-old Sofian was overjoyed to finally wear the white jersey as the leading Asian rider in the race after four attempts.

“This was part of our plans which I discussed with coach Yusof Nasir. I had to make an early breakaway as I was not too far from the Korean rider’s GC time. So, I worked hard to win all three intermediate sprints,” said Sofian.

“I will try to defend this jersey tomorrow and we are confident, having prepared two months for this race.”

Plain sailing in Langkawi as squad of 24 check in 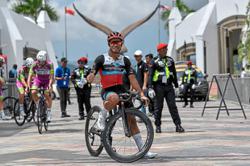 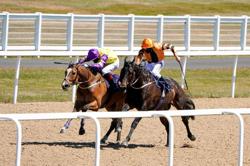