On track with brand-new look

During its soft launch, Klang Municipal Council (MPK) acting president Elya Marini Darmin said the council opened the stadium to accommodate the MSSD where the newly-laid eight-lane 400m synthetic track would be used.

“Our track surface is made of good materials and we decided that the students should be allowed to use it to attain the highest possible performance standards.

“We are unable to open the grass pitch for football games as it still needs to get bedded in, cured and be allowed to grow so it does not leave patches.

“We will have the grass pitch ready for use by the first week of April,” she said.

School students and morning joggers joined in for the soft launch that included an exercise session.

Elya Marini said Stadium Sultan Suleiman was the people’s asset and all Klangites must use it to improve themselves, be it through sports training, better health or enjoying a walk with their families.

“It is wonderful to provide a social space for people to come together. Just a few years ago, the stadium was falling into disrepair but with the Selangor government’s financial help, it can continue to be used as a hub for community activities,” she added.

MPK had received an estimated RM4.56mil for the upgrading of the 45-year-old stadium that began in June 2018 and was completed on Dec 8 last year.

The upgrade of the stadium stalled when issues such as water ponding and metal fatigue to its grandstand steel structure – which was eventually replaced – were discovered.

Repairs took an additional five months. Another issue that caused the work period to be extended was manpower constraints.

MPK has also upgraded the mini grandstand that has an estimated 1,000 seating capacity.

“As a teacher, I see it as a good sports facility for the students to train at. But, I hope the council will speed up the provision of amenities for sports like the discus, javelin and long jump sand pit,” he said.

Former sportsman T Kanniappan, 64, said he was glad that the stadium had been completed.

“I believe it will provide students an opportunity to showcase their sporting talents and cultivate team spirit.

“Booking fees for school students wanting to use the facilities must be kept nominal.

“The stadium’s refurbishment should help to bring forth new sports talents,” he added.

Mohd Zakri Mohd Jaapar said with the stadium reopened, he would bring his family for Sunday morning walks to enjoy quality time with his wife Rahiazaurah Salehuddin and children.

Elya said the stadium refurbishment, which was one of the urban rejuvenation projects, would be open to the public from 6.30am to 10am and from 4pm to 7pm, daily.

MPK is also offering a 30% discount on booking fees for the use of the stadium from now until April. Schools get a special rebate.

She added that the council would place only uniformed enforcement personnel at the stadium for better security and the place would be monitored with closed circuit television cameras.

Malaysian Institute of Planners president Ihsan Zainal Mokhtar said urban public spaces were crucial for people and the value of public sports venues to local authorities and their communities extends beyond sport.

“Stadium Sultan Suleiman has played and will continue to play a role in bringing communities together.

“It has a social and cultural impact,” he added.

Elya added that the council would begin the second phase of upgrades for the stadium, where an estimated RM300,000 would be spent to improve the drainage outside the perimeter fence closer to Dewan Melayu Klang along Jalan Kota Raja, to ensure no back flow of water into drains around the running track area. Elya Marini (second from left, with cap) taking part in the Senam Robik with the public at the stadium.

Kanniappan said the refurbished facilities should help to bring about new sporting talents.

Youngsters enjoying a kickabout at the launch. The grass pitch for football will be ready in April. 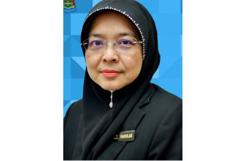 Authorities: We will close parks if visitors breach SOP 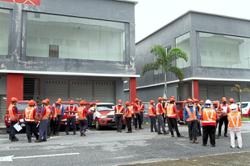 Raided for illegal power supply use