IT WAS celebration time for Selangor as they bagged a hat trick of titles at last Saturday’s The Sultan of Selangor’s Cup (TSSC) after three generations of football players representing the state defeated their Singaporean counterparts.

The Red Giants made it a triple celebration at the Shah Alam Stadium when the Selangor Selection – comprising Malaysia Super League teams PKNS FC and Selangor FA players – pipped the S-League Selection 5-3 on penalties after a 1-1 tie on the night’s showpiece match.

A superb individual goal from Singapore Selection’s Shuhei Hoshino in the ninth minute, after he beat three Selangor defenders, had at first dampened the euphoria of die-hard Selangor fans.

But the Selangor Selection, despite being on the back foot, got back on level terms just six minutes later, thanks to Amri Yahya’s free kick which was headed in by Rufino Segovia.

Amri’s lofty free kick from almost 40 yards was perfectly placed for Rufino, who made no mistake with a towering header that gave Singapore goalkeeper Zaiful Nizam Abdullah no chance.

At 1-1, both sides were fired up and had their fair share of opportunities for the remainder of the match but neither side could find a breakthrough during regulation time and the match had to be decided on penalties. Sultan Sharafuddin (centre) and Tengku Amir Shah (third from right) presenting the trophy and a cheque for RM80,000 to the Selangor Selection after the state side clinched the 17th Sultan of Selangors Cup at Shah Alam Stadium. — Photos by IZZRAFIQ ALIAS, M.AZHAR ARIF and MUHAMAD SHAHRIL ROSLI / The Star.

Despite conceding two penalties, Selangor’s keeper Mohd Shahril Saa’ri was able to pull off a brilliant save from Irfan Najeeb’s penalty, triggering a euphoric roar from the hordes of Selangor supporters in the stands.

Jafri Firdaus Chew then put the hosts 4-2 up before Huzaifah Abd Aziz made it 4-3. But it was Muhd Faris Ramli who sealed the deal for Selangor as he converted his spot kick that ended Singapore’s hopes of winning their third consecutive title.

The winners, who received the trophy from the Sultan of Selangor Sultan Sharafuddin Idris Shah, also earned RM80,000 in prize money for their triumph while Singapore took home RM10,000.

Selangor’s Veterans also did not disappoint this year when they won in the curtain raiser match against Singapore’s Veterans.

They too edged the Singapore Veterans 3-2 on penalties after a 1-1 tie in regulation time, with goals Karim Pin netting for the home side via a penalty and Steven Tan’s equaliser for Singapore.

The match started on a frantic pace when the 56-year-old Karim had a one-on-one chance against Singapore’s goalkeeper Shahri Rahim within the first minute but he was unable to take advantage as Shahri kept the hosts at bay.

Both sides gave a good account of themselves despite their age as Selangor, captained by legendary defender Datuk Soh Chin Aun and Singapore by Fandi Ahmad, entertained the crowd in their 40-minute encounter. 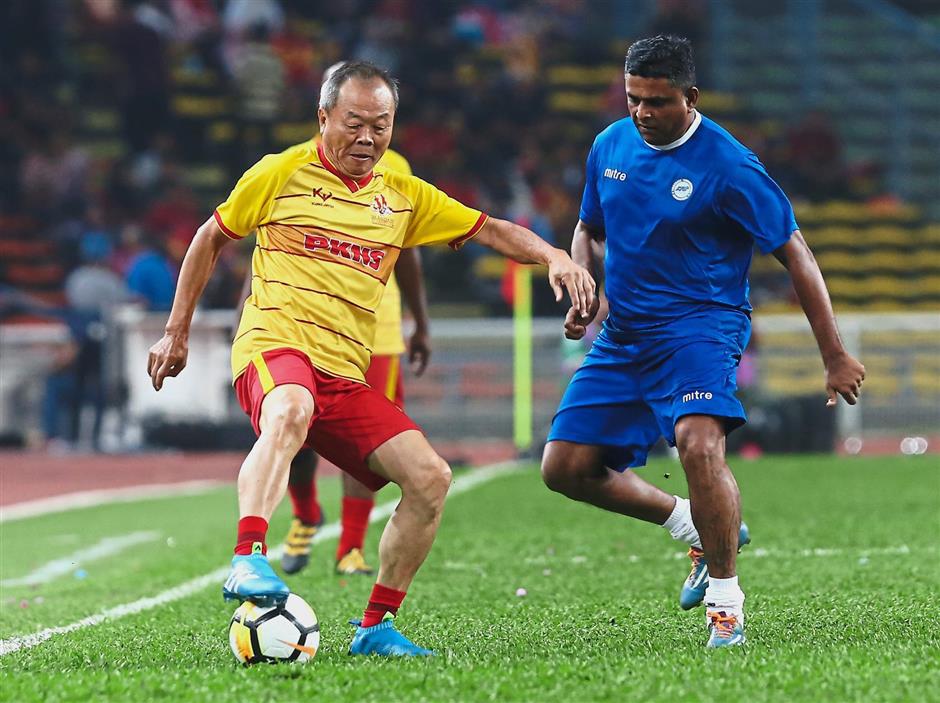 Selangor Veterans captain Chin Aun (left) in the thick of action with Singapores E. Manimohan during their match.

Selangor’s veteran midfielders Chin Aun and Ismail were a constant thorn to their opponents as they slipped the ball past their opponents defence on numerous occasions to find Karim, Zainal Abidin and and Zainal Nordin.

Selangor’s veteran goalkeeper Azlisham Ibrahim was the star of penalty shoot-out when he prevented Singapore’s Steven Tan from scoring a second time.

The Selangor and Singapore Schools Challenge, which was the first match of the evening, was also the first feather in Selangor’s cap when the Under-16 youths put on a composed and assuring performance to come away with a 2-0 win.

The squad, comprising the best youth players in the state from seven schools, made good on their vow to exact revenge after Singapore edged them 4-3 on penalties last year during the inaugural Schools Challenge in Singapore last year. 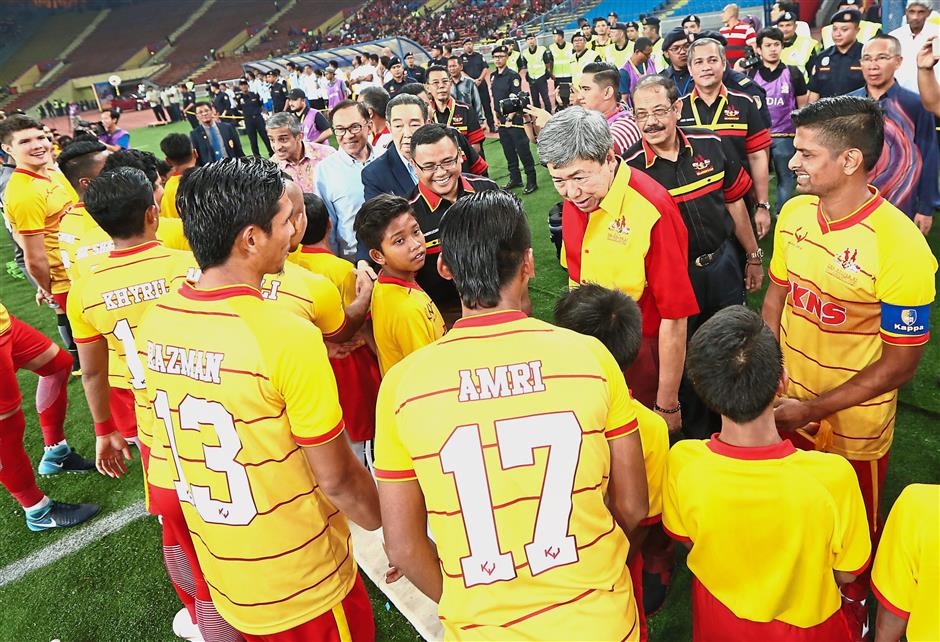 Sultan Sharafuddin (third right), Abd Karim (second right) and the guests of honour meeting with the Selangor selection players before the start of the match.

Under-16 skipper Muhammad Iqmal Hazim Muhamed Supian led by example as he scored the opening goal in the 19th minute, with Muhd Fariz Abd Zhafor doubling the lead two minutes later following a lapse in concentration in the Singaporean defence.

In the second half, the determined young Lions stepped up the tempo but could not penetrate the Selangor’s defence, with goalkeeper Muhd Amin Najmie making a number of crucial saves.

More than 60,000 fans attended the matches which saw three trophies up for grabs for the first time in Selangor.

The programme, which began at 5pm with the arrival of the Raja Muda of Selangor Tengku Amir Shah Sultan Sharafuddin Idris Shah, went without a hitch.

Pyrotechnics and fireworks were also on show during the opening ceremony launched by Sultan Sharafuddin.

A new addition to this year's opening ceremony was a laser show, much to the crowd’s delight. A Honda City for the lucky draw sponsored by Tanjung Balai Sdn Bhd was won by a lucky ticket holder bearing the serial number 009054.

TSSC organising chairman Tan Sri Abd Karim Munisar said that the effort put in by the organising committee this year was more than previous years due to the addition of the new Schools Challenge and all their hard work paid off.

“We have set the bar higher for the next edition now after this year's memorable showing.

“We are glad that the fans were able to show up this year and pack the stadium despite it being the school holidays and we appreciate that they rallied behind their teams.

Abd Karim added that he was glad Selangor was able to deliver on their promise to take all three titles this year and credited the loyal Selangor supporters who made their presence felt.

“It is also partly because of them that Selangor was able to turn the tide this year and take all three trophies.”