Then, June Wei scored an impressive 21-18, 21-19 victory over India’s 2019 World Championships bronze medallist B. Sai Praneeth in the second qualifying round.

“He showed that his confidence is higher now and his stamina has improved.

“He still has to improve on his strength and power but he is on the right track.”

June Wei, though, has a tough task next against Hong Kong’s world No. 18 Angus Ng Ka Long in the first round of the tournament proper today.

“It will be difficult against Angus as he is a good player. It also depends on how well June Wei can recover after playing two matches in a day,” said Nova.

Meanwhile, there was also joy for Malaysia when independent men’s doubles pair Boon Xin Yuan-Wong Tien Ci made it into the main draw with a 21-15, 21-19 win over unheralded Canadian pair Adam Dong-Nyl Yakura.

Aaron-Wooi Yik have received a fresh boost after reaching a career-high No. 2 in the latest world rankings.

In the women’s doubles, world No. 6 Pearly Tan-M. Thinaah were in their element when they only needed 27 minutes to brush aside Singapore’s world No. 24 Jin Yujia-Crystal Wong 21-8, 21-13.

Pearly-Thinaah will play either independent pair Vivian Hoo-Lim Chiew Sien (No. 18) or Taiwan’s Lee Chia-hsin-Teng Chun-hsun (No. 29), who were involved in a later match for a place in the quarter-finals.

In the men’s singles, independent player Lee Zii Jia, who has dropped from No. 2 to No. 4 in the world after back-to-back early round exits in the Malaysian and Indian Opens, will be out to redeem himself when he opens his campaign against Taiwanese qualifier Lin Chun-yi.

Badminton Association of Malaysia’s (BAM) Ng Tze Yong (No. 28) will also see action today in the first round against Denmark’s world No. 34 Hans-Kristian Vittinghus. 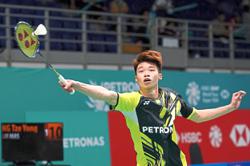 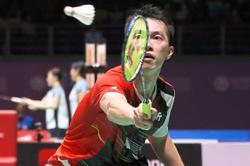