Now for the real test 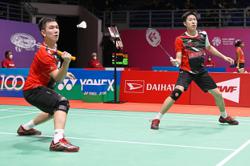 THE opener was easy peasy but the real test awaits Ong Yew Sin-Teo Ee Yi in the second round.

Yew Sin and Ee Yi, ranked 10th in the world, are unfazed and ready to face the giants again.

“Although we have beaten them before, we don’t want to put too much expectations on ourselves,” said Yew Sin.

The duo will be hoping for a repeat of their thrilling win against the world No. 4 in the quarter-finals at last year’s World Championships in Huelva, Spain.

The win in the world meet was their first in four attempts over Lee Yang-Chi-lin.

Yew Sin-Ee Yi will be joined by another independent pair, Tan Kian Meng-Tan Wee Kiong in the second round after the latter came from behind to beat Denmark’s Jeppe Bay-Lasse Molhede 18-21, 21-15, 21-17 in 50 minutes.

With the win, Kian Meng made up for his disappointment of losing in the mixed doubles with Lai Pei Jing in an earlier match.

Kian Meng-Wee Kiong, however, have a tough task in the second round as they face Indonesian Open winners Liu Yuchen-Ou Xuanyi of China.

“We started a bit slow but managed to overcome things in the second and third games thanks to the supporters. I didn’t expect so many people to come to the Axiata Arena even though it was just the first round,” said Kian Meng.

Meanwhile, it was not a good day for Wee Kiong’s former partner Goh V Shem as he and Low Juan Shen found Indonesia’s world No. 7 Fajar Alfian-Rian Ardianto too hot to handle and went down 18-21, 9-21.

Yeen Yuan-Valeree have an uphill battle in the second round tomorrow against China’s world No. 1 Chen Qingchen-Jia Yifan.