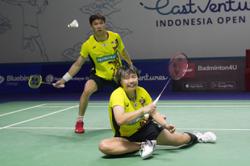 Malaysia came from behind to level the score at 2-2 with Singapore and the atmosphere was tense when Shaqeem stepped onto the court in the decider but the 21-year-old displayed nerves of steel to beat Joel Koh 21-10, 21-17 to deliver the winning point.

Earlier, as predicted Malaysia lost the opening tie through Jacky Kok as he was no match for reigning world champion Loh Kean Yew and he was easily swept aside 12-21, 12-21.

When all seemed lost with Singapore taking a strong 2-0 lead, Lee Shun Yang was given the huge responsibility to rescue the tie and he did not disappoint.

Inspired by their teammate’s heroics, the pumped up scratch pairing of Chen Tang Jie-Mohd Haikal Nazri played superbly to get the better of Andy Kwek-Danny Chrisnanta 21-17, 21-15.

In the final today, Malaysia will take on Thailand who sprung a surprise when they took down defending champions Indonesia 3-2 in the other semi-final.

Assistant team manager Joanne Quay was full of praise for Shaqeem and the team.

“It was not easy for Shaqeem but he remained calm and collected,” said Joanne.

“I think seeing the entire team behind him inspired him to push until the end.

“In the end, it was a remarkable win by the team.”

It will be tough for Malaysia against Thailand led by Kunlavut Vitidsarn.