Viktor Axelsen of Denmark celebrates after defeating Malaysia's Lee Zii Jia in the quarter-finals of the Denmark Open. - BADMINTON PHOTO.

Zii Jia had hoped to get better of the Dane again after his famous win in the All-England final in March but this time, he found Axelsen too hot to handle as he went down 19-21, 19-21 in 39 minutes in the quarter-finals in Odense on Friday.

The other semi-final clash will be between Kento Momota of Japan and Tommy Sugiarto of Indonesia.

World No. 1 Momota had it quite easy as his opponent Jonatan Christie of Indonesia retired after trailing 13-21, 0-15 while Tommy also won his quarter-final match in a similiar fashion when Sameer Verma of India gave up after losing the opening game 17-21.

Meanwhile, Malaysia's hope of having two semi-finallists in the men's doubles was dashed with the defeat of independent shuttlers Ong Yew Sin-Teo Ee Yi. The duo went down 18-21, 19-21 to Mark Lamsfuss-Marvin Seidel of Germany.

Only Goh Sze Fei-Nur Izzuddin Rumsani are left to keep the Malaysian flag flying in Denmark but they have a tough job against home favourites Kim Astrup-Anders Skaarup Rasmussen.

The Danes have beaten the Malaysians in all their last three meetings.

Said Izzuddin: "We are happy to upstage two top 10 pairs for the first time here in the Denmark Open. These wins will surely give us the motivation to keep going." 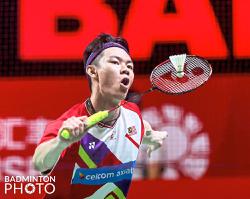 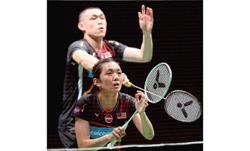