National top junior shuttlers – 18-year-olds Goh Boon Zhe-Beh Chun Meng and the Cheng sisters, Su Yin and Su Hui – secured a triple joy for the country at the German Under-19 International when they won the boys’ doubles, girls’ doubles and mixed doubles titles in Mulheim on Sunday.

In the mixed doubles, Boon Zhe-Su Yin earned bragging rights over their compatriots when they beat Chun Meng-Su Hui 21-15, 21-16 in the first final of the day.

And with less than a two-hour rest, Su Yin and her twin Su Hui outplayed France’s Clemence Gaudreau-Elsa Jacob 21-9, 21-16 for the girls’ doubles crown.

It was their second international title after bagging the Bangladesh Junior International Series two years ago.

Not to be outdone, Chun Meng-Boon Zhe stamped their class in the boys’ doubles final with an emphatic 21-13, 21-13 win over German duo Jonathan Dresp-Kenneth Neumann.

It too marked Chun Meng-Boon Zhe’s second triumph as they had won the Jakarta Junior International Series in 2019.

The quartet will now switch their attention to the more competitive Czech Open which begins on Thursday.

It will be the players’ third senior outing this year after the Slovenia International and Austrian Open in May.

In Slovenia, despite competing against older players, they showed that they were no pushovers by reaching the semi-finals. 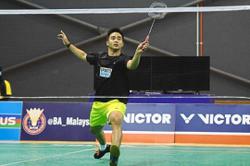