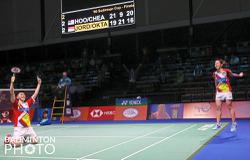 Determined: Hoo Pang Ron and Cheah Yee See (inset) vow to do their best in the Sudirman Cup.

PETALING JAYA: The mixed doubles pair Hoo Pang Ron-Cheah Yee See will face the biggest challenge of their lives when they play in the Sudirman Cup for the first time as the top pair.

But instead of worrying about the star-studded cast whom they are set to face, the world No. 27 Pang Ron-Yee See are looking forward to their baptism of fire in Vantaa, Finland, with an open mind.

As the new kids on the block, the duo know that it would be hard to break the stronghold of the top 10 pairs in the world.

The pairs to assume the main roles for their respective nations in the mixed team event are world No. 2 and Tokyo Olympic Games champion Wang Yilyu-Huang Dongping of China, Dechapol Puavaranukroh-Sapsiree Taerattanachai of Thailand, Praveen Jordan-Melati Daeva of Indonesia, Yuta Watanabe-Arisa Higashino of Japan, Seo Seung-jae-Chae Yujung of South Korea, and Marcus Ellis-Lauren Smith of England.

Pang Ron-Yee See have found themselves in the forefront of things following the exit of seniors Goh Soon Huat-Shevon Lai Jemie and Tan Kian Meng-Lai Pei Jing in February.

“This is our first Sudirman Cup and we are the top ranked pair. All other mixed doubles pairs have played in their position as top pairs for some time but it will be all new for us,” said Pang Ron, who arrived in Finland on Wednesday. The tournament begins on Sunday and will end on Oct 3.

“On ranking, we are certainly not the best pair here but this is the opportunity that we had been waiting for. Yee See and I want to give our opponents a tough fight and learn along the way too.”

Pang Roon-Yee See had thrived when thrown in the cauldron at the Asian leg of the World Tour in Bangkok early this year.

They however slumped to early defeats in Europe after crashing out in the first rounds of the Swiss Open and All-England – to show their inconsistency at the higher level of play.

“We still do have much to improve but we are not here to make up the numbers. We have the support of our teammates and we will fight for every point,” he said.

Their first two tests in Group D will be against Tokyo Olympics bronze medallists Watanabe-Higashino and Ellis-Smith. Only the top two teams in each group will advance to the last eight.