PETALING JAYA: After 19 years of glorious service to the nation, Malaysia's badminton icon Lee Chong Wei looks set to hang up his racquet.

The nation's most successful badminton player – with 69 singles titles to his name – is calling for a press conference at the Youth and Sports Minister's office on Thursday (June 13) believed to announce his decision to step away from the sport.

Chong Wei has already met Youth and Sports Minister Syed Saddiq Syed Abdul Rahman and Badminton Association of Malaysia president Datuk Seri Norza Zakaria to get their blessings to allow him to take it easy to avoid a relapse of his nose cancer, as prescribed by his doctor.

Syed Saddiq and Norza will also be present at the press conference.

The Youth and Sports Minister confirmed he had met with Chong Wei but did not want to reveal any details.

"We support and respect whatever decision Chong Wei makes. We will not forget his contributions to the nation," said Syed Saddiq.

After treatment in Taiwan, he returned to training in early January.

However, his on-off short training stints have tapered off and he has not been seen on any badminton court in the last six weeks.

Chong Wei's retirement will come as no surprise as he has not played competitively since July last year.

He initially wanted to return for the All-England in March and Malaysian Open in April – but it did not happen.

Time is also running out for him to make a comeback to international competitions as his one-year ranking protection will expire on Aug 14.

Without the privilege, Chong Wei, now ranked No. 190 in the world, will not be eligible for the top-tier World Tour tournaments, which offer significant points for Olympic qualification.

Chong Wei has made it clear from the start that the Tokyo Olympics was the only reason why he deferred his retirement even after he was cleared of cancer in November. 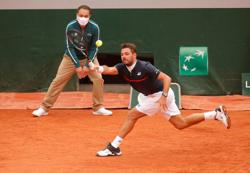 Wawrinka says ready to challenge for title at Roland Garros