NSC: National athletes to get less allowance this year New pay: SEA Games 100m defending champion Haiqal Hanafi will be among the athletes affected by the new allowance scheme.

KUALA LUMPUR: National athletes will now have less in their pockets this year.

This comes after the National Sports Council (NSC), badly hit by the budget cuts, are forced to revert to their old allowance structure.

For instance, silver and bronze medallists at this year’s Asian and Commonwealth Games will now take home RM4,000 and RM3,500 monthly rather than the previous flat rate of RM4,500 which is what the gold medallist will now receive.

NSC director general Datuk Ahmad Shapawi Ismail stressed that the adjustment was necessary to spend within their means but also to ensure fairness among the top achievers.

“Due to the lower allocation from the government for the athletes’ preparation programme this year, we’re forced to make necessary adjustments to the allowance scheme,” said Shapawi.

“We decided to reinstate the 2018 scheme which pays athletes based on their achievements.

“Previously (2018-2021) those who won bronze were paid the same rate as the gold medallists.

“This was unfair to those who won gold. Similarly, it also didn’t help the fact that it created a situation whereby silver and bronze medal winners have less motivation to improve themselves.”

Asked if this new scheme would cause dissatisfaction, Shapawi replied: “We’re not hiring athletes to work for us. Our main priority is to provide them with all the necessary platform to take their career to greater heights such as a place to train, coaching and support services.

“Let’s not forget, the training allowance they receive is on top of the accommodation, meals, transport, medical and many other benefits.

“Those who’re employed (outside) still earn their salary while some athletes are also getting paid extra by their respective associations.

“We hope that the athletes will understand the predicaments that the country is facing.

“Our country is in the recovery process after being badly affected by Covid-19 as well as the recent floods and in need massive funding.”

NSC announced that a total of 293 athletes – comprising 248 able-bodied and 45 para athletes – have been retained for this year’s programme.

There were a total of 432 able-bodied and 114 para athletes under the previous programme.

For para sports, 22 new athletes have been called up. There was no back-up programme for para sports last year. 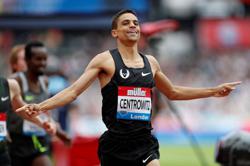