KUALA LUMPUR: It was a long anxious wait but well worth it for national discus thrower Queenie Ting Kung Ni.

Her sixth and final attempt of 48.56m at the Malaysian Athletics Grand Prix was red-flagged but after a protest, she was named as the rightful winner.

And the 24-year-old Sarawakian jumped in sheer joy as she did not only dethrone senior Choo Kang Ni as the new No. 1 but her distance was declared as a new national record at the National Sports Council training track in Bukit Jalil yesterday.

Kang Ni, also the 2019 Philippines SEA Games silver medallist, could only manage 45.53m for second spot while another seasoned campaigner Yap Jen Tzan, runner-up at the 2015 Singapore SEA Games, took bronze with an effort of 44.82m.

Queenie thought she had blown it but fortunately, her coach Mohd Ali Hamid came to the rescue.

“My final attempt was faulted. They deemed that it had landed just outside of the line and the official carried the red flag, ” said Queenie as she recalled the anxious moment.

“Fortunately, my coach, who recorded the throw, noticed that the line was not straight as it should be and argued that it shouldn’t be counted as a fault.”

The jury of appeal led by S. Govindarajoo deliberated and agreed that part of the line was indeed not straight and Queenie’s throw did fall inside the line.

“I’m just so, so happy that my hard work has paid off, ” said Queenie, whose previous best was 46.51m. She was promoted to the elite squad only last year.

“I had faith in myself. I knew I can break the national record in an official competition because I managed to crack the 50m barrier once... I did 50.41m during an assessment done by National Sports Institute last year.”

Queenie said winning the gold in her first competition after a 14-month hiatus has given her the much-needed boost ahead of the Vietnam SEA Games this year although it would be a tall order to beat Thailand’s Subenrat Insaeng, who is the undisputed SEA Games champion since 2011 and has a personal best of 61.97m.

“She’s just simply a class above in this region but I would try to give her a fight because I’m training hard to hit 56m, ” said Queenie, who won a bronze in her SEA Games debut two years ago with an effort of 45.28m.

“To get at least a silver, I must beat Kang Ni again. This is only my second win against her after the Malaysian Closed (2019). She’s three years my senior and we’re good friends too. This friendly rivalry is going to bring the best in us.”

The mini meet, which featured only 19 events over two days, also saw another national record broken by Grace Wong in the women’s hammer throw on Saturday.Said Manshahar: “Some of the athletes have shown progress although there had not been any competitions due to the Covid-19 pandemic. Hopefully, we will see a stronger performance at the Malaysian Open in Bukit Jalil from June 11-13 next.” 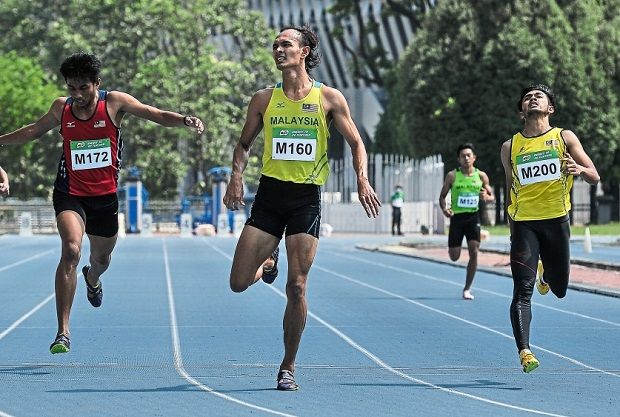