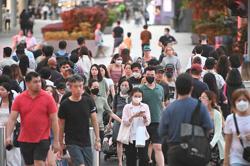 MALAYSIA’S dependence on cheap labour provided by foreign workers is again under close scrutiny. Some are describing it as an unsustainable addiction and asking whether it is time to stop the practice and just employ locals. This would at least ease the unemployment situation in the country.

But those involved in certain industries are arguing that they cannot do without foreign workers. They are mainly from the plantation, construction and manufacturing sectors.

We must all play our parts now
Let’s get going on those vital institutional reforms
Hopeful that the nation will heal itself quickly
Should this decision be questioned?
No space for racial and religious discord
Focus on the environment
We voted! But for seniors it wasn’t an easy thing to do
It’s time to reboot Malaysia in a new direction
A free press is a bedrock of democracy
A dangerous precedent